The Thai party, which has named Prayut Chan-o-cha as the prime minister candidate, is leading the general election on Sunday. 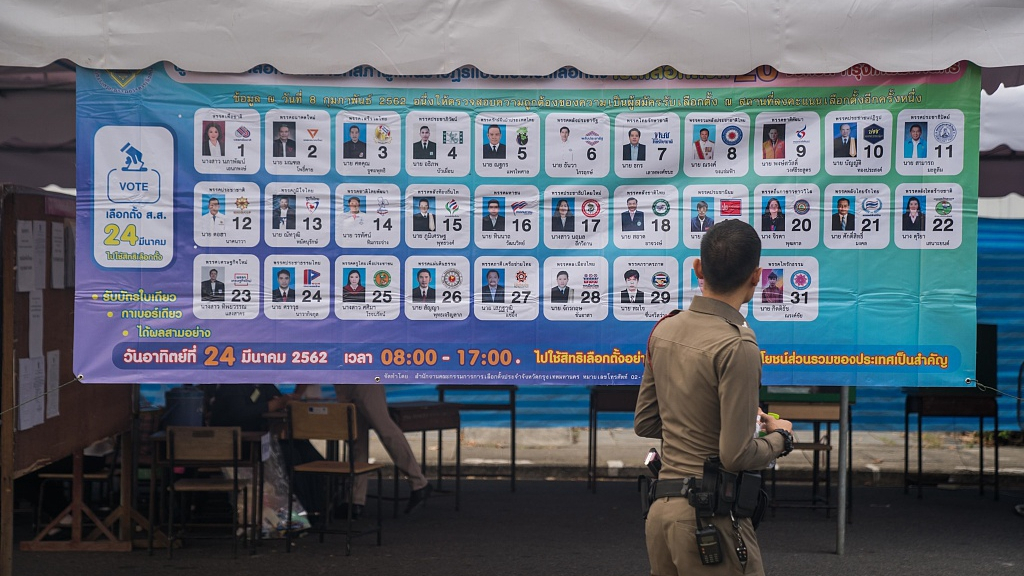 A policeman walks past a candidate list outside a polling station on the Thai General election day, March 24, 2019. (Photo: VCG)

Palang Pracharath (power of people's state) Party reportedly has won more than 7.5 million votes, followed by Pheu Thai (for Thais) Party which has gained over 7 million votes, according to unofficial results of votes counted on late Sunday night by the Election Commission.

Coming third was Future Forward Party with some 5.2 million votes, followed by Bhumjaithai (proud Thais) Party which has gained about 3.2 million votes.

The Democrat Party, the country's oldest, has been dealt the heaviest blow, which prompted party leader Abhisit Vejjajiva to resign hours after the voting ended at 5:00 p.m. on Sunday. The Democrats have won only about 3.1 million votes.

Thailand has a total of 51.2 million eligible voters, including some 7.3 million first-time voters nationwide.

Nevertheless, the polling agency is yet to verify all 500 members of parliament (MPs) until May 9, as provided by constitution's organic law on the election of MPs. The 500 MP seats include 350 in constituency-based mode and 150 in proportional party-list mode.

Several parties are expected to join Palang Pracharath Party in the creation of a post-election government, including Bhumjaithai Party and the Democrat Party.

Meanwhile, Prayut said earlier that he would continue to assume his concurrent posts as prime minister and chairman of the National Council for Peace and Order until a post-election government has been set up.