WORLD Pro-regime rallies in Tehran as US imposes sanctions

Pro-regime rallies in Tehran as US imposes sanctions 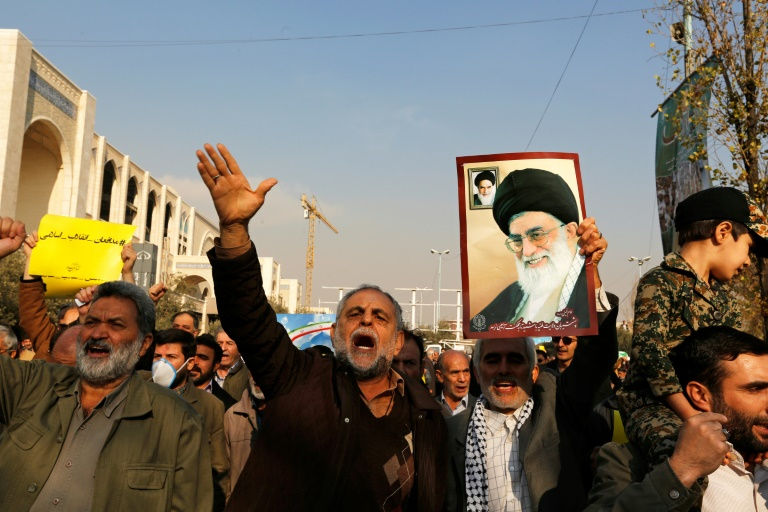 Pro-regime rallies were held around Tehran Friday with authorities seeking to put the recent violent unrest to bed, as Washington slapped fresh sanctions on Iran and called for an emergency UN Security Council meeting.

Iranian officials blamed a plot by the CIA, Israel and Saudi Arabia for the unrest that convulsed much of the country for five days -- part of the increasing tensions playing out between Iran and its neighbours since President Donald Trump came to power.

For a third straight day, there were large pro-government rallies, this time in 40 locations around Tehran province and several cities including Tabriz and Kerman after Friday prayers, as authorities declared the unrest over.

"We are here to show that we can solve our problems ourselves, and will never allow Saudi Arabia, the USA and Israel to intervene... and we are behind the revolution until our last drop of blood," Mohsen, an IT engineer in the crowd, told AFP.

The US imposed sanctions against five Iranian firms alleged to have been working on an illegal ballistic missile programme, linking the move to the protests.

On the streets of Tehran, a heavy police presence lingered though there were no reports of fresh protests overnight.

There were some reports of small anti-government demonstrations in provincial towns, but these could not be verified.

Police asked people to send photos and videos of "trouble-makers", local media reported, and to identify a number of suspects already caught on camera.

It remains difficult to gauge who was involved in the unrest that began December 28, claiming 21 lives -- mostly protesters -- and leading to hundreds of arrests.

President Hassan Rouhani's supporters have blamed conservative rivals for stoking anger over economic issues, which quickly grew out of control and saw attacks on security forces, government buildings and symbols of the regime.

The conservatives deny the accusations and say Rouhani must do more to help the poor, with parliament already moving to repeal an unpopular fuel tax hike in his recent budget.

The United Nations Security Council was set to hold an emergency meeting on the issue on Friday at the request of the United States.

Chief prosecutor Mohammad Jafar Montazeri blamed the unrest on a plot dating back four years by the United States, Israel and Saudi Arabia.

"The main architect of this plan is Michael D'Andrea," Montazeri said, referring to the head of the CIA's Iran desk.

"They launched (social media) campaigns with the theme of 'no to high prices', 'no to paying bills'," he said, adding that the plan was to start unrest in the provinces before moving on Tehran.

Montazeri also claimed there were efforts to infiltrate the Islamic State group into the country.

Many officials have nonetheless recognised the genuine economic grievances of many Iranians, particularly a jobless rate at close to 30 percent for young people.

Iran's economic growth rebounded to more than 12 percent last year after sanctions were lifted under a 2015 nuclear deal with world powers, but analysts say much of the windfall has come from renewed oil sales that generate few jobs.

It was higher than a previous figure of 15,000 given by the head of the Revolutionary Guards, but still far below the hundreds of thousands that took to the streets during the last major protest movement in 2009.

While the US has piled pressure on Iran, both Russia and Turkey have jumped to its defence.

Moscow criticised Washington for calling the UN Security Council meeting and then called for close-door discussions ahead of Friday's deliberations.

Diplomats expect Russia to try to block the formal Council meeting by requesting a procedural vote to decide whether the situation in Iran should be on the agenda.

"The United States continues to interfere both openly and covertly in the internal affairs of other countries. They do so shamelessly," Russia's Deputy Foreign Minister Sergei Ryabkov said, quoted by Interfax news agency.

US President Donald Trump must decide next week whether to continue waiving nuclear-related sanctions suspended under the 2015 nuclear deal between Iran and world powers.

Under the deal, Trump must actively lift certain sanctions every few months and the next deadline falls on January 12.

Meanwhile, Turkish President Recep Tayyip Erdogan said: "We cannot accept that some countries -- foremost the US, Israel -- interfere in the internal affairs of Iran."

Trump repeatedly tweeted his backing for the protesters during Iran's unrest, at one point saying: "Such respect for the people of Iran as they try to take back their corrupt government".

That was rebuffed by marchers on Friday.

"Mr Trump passed laws against Iranians such as the immigration ban, and he called Iranians 'savages'... and suddenly he is sympathising and supporting Iranians and it is ridiculous," said Khalili, a government worker in Tehran.