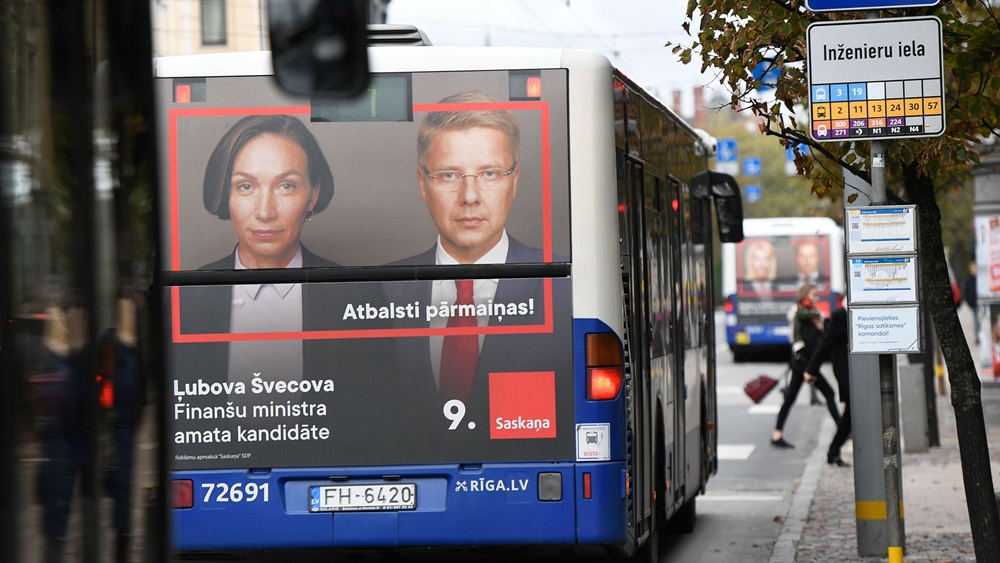 The pro-Kremlin Harmony Party won Latvia's general election ahead of populists who may yet help it form a coalition, final vote results showed on Sunday.

Harmony topped the ballot with a 19.91-percent vote share ahead of two populist parties, KPV LV with 14.06 percent and the New Conservative Party with 13.6 percent.

"No coalition combination is possible without Harmony that would appear able and stable," Harmony Chairman and Riga Mayor Nils Ushakovs said.

Harmony never entered government as it failed to attract coalition partners, but the populists suggested before the vote that they may help propel it to power this time. "KPV LV can work with anybody, we don't have any red lines regarding any other political force," lawyer Aldis Gobzems, KPV LV's candidate for prime minister, said in a recent TV debate.

Harmony and the two populist parties can now put together a coalition mustering 55 seats in the 100-member parliament.

The country of two million, a quarter of whom are ethnic Russians, is a frontline state in Europe and NATO's increasingly tense relationship with Russian President Vladimir Putin.

Latvia has long been plagued by corruption and money-laundering issues. The country's central bank governor is currently awaiting trial for accepting a bribe.

With seven parties winning seats, coalition talks could go on for weeks or months. The pro-EU, pro-NATO liberal For Development/For! Party came fourth with 12.04 percent, beating parties from the current center-right governing coalition including the right-wing National Alliance, which earned 11.03 percent.

The center-right Greens and Farmers Union of Prime Minister Maris Kucinskis won 9.96 percent and the New Unity took 6.67 percent as the last party crossing the five-percent threshold to have seats in parliament.

The current parliament will keep working until November while the parties lead talks on the new coalition.

"Forming a new government will be very difficult," Kucinskis said after the election.

The ruling coalition, consisting of Kucinskis's party, the National Alliance and the Unity Party, appears to have lost almost half of its votes.

"The messages that the voters have tried to send is that we're going to have some new faces in politics," said Janis Ikstens, a political scientist at Latvia University. "And perhaps they're not happy with the neglect of social needs."

Harmony recently rebranded itself as a Western-style social democratic party, saying it is committed to the European Union and NATO. But it ended its official cooperation agreement with Putin's United Russia Party only last year.

Latvia, a member of the EU and NATO, shares a 276-kilometer border with Russia.

NATO currently has more than 1,000 troops deployed in the Baltic country.