WORLD Problems with US can be solved easily without current mindset: Turkish FM

Problems with US can be solved easily without current mindset: Turkish FM 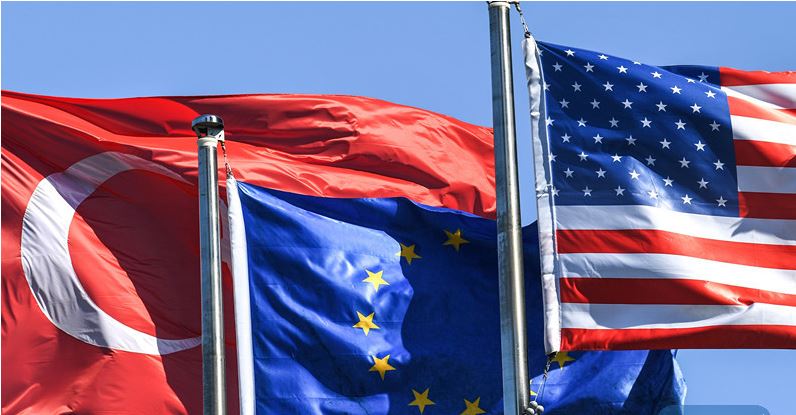 Turkish flag, European Union's flag and US flag float in the wind at the financial and business district Maslak on August 15, 2018 in Istanbul. (Photo: AFP)

ANKARA, Aug. 16 (Xinhua) -- Problems with the United States over a series of differences can be solved easily but not with its current mindset, Turkish Foreign Minister Mevlut Cavusoglu said on Thursday.

"We can easily solve problems with the US but not with the current mindset of this country," the minister told in a news conference in Ankara, pointing out "the US cannot see who its real friend is."

Cavusoglu also said that Turkey has done its part in terms of preserving friendly relations with the United States, and accused once again Washington of supporting terrorist groups targeting Turkey.

He was referring to a Kurdish militia in Syria supported by Washington, which Ankara considers as the local branch of the outlawed Kurdistan Workers Party (PKK). This movement has waged a separatist conflict in southeastern Turkey since 1984.

On Wednesday, Cavusoglu said that Turkey is ready to discuss its ongoing issues with the Washington administration as long as there are not threats.

The two NATO allies are engaged in a bitter and complex diplomatic and trade dispute over the detention of an American pastor, Andrew Brunson, who was accused of terror related charges.

Turkish currency lira plunged to record lows last week before recovering some of its losses in the past two days.

The US President Donald Trump doubled tariffs on Turkish steel and aluminum exports to the US last week, prompting Ankara to raise tariffs on some American good, such as cars, tobacco and alcohol.

US Treasury Secretary Steve Mnuchin warned Thursday that his country would levy more sanctions on the troubled Turkish economy if Ankara does not soon release pastor Brunson who is on house arrest in western Turkey.