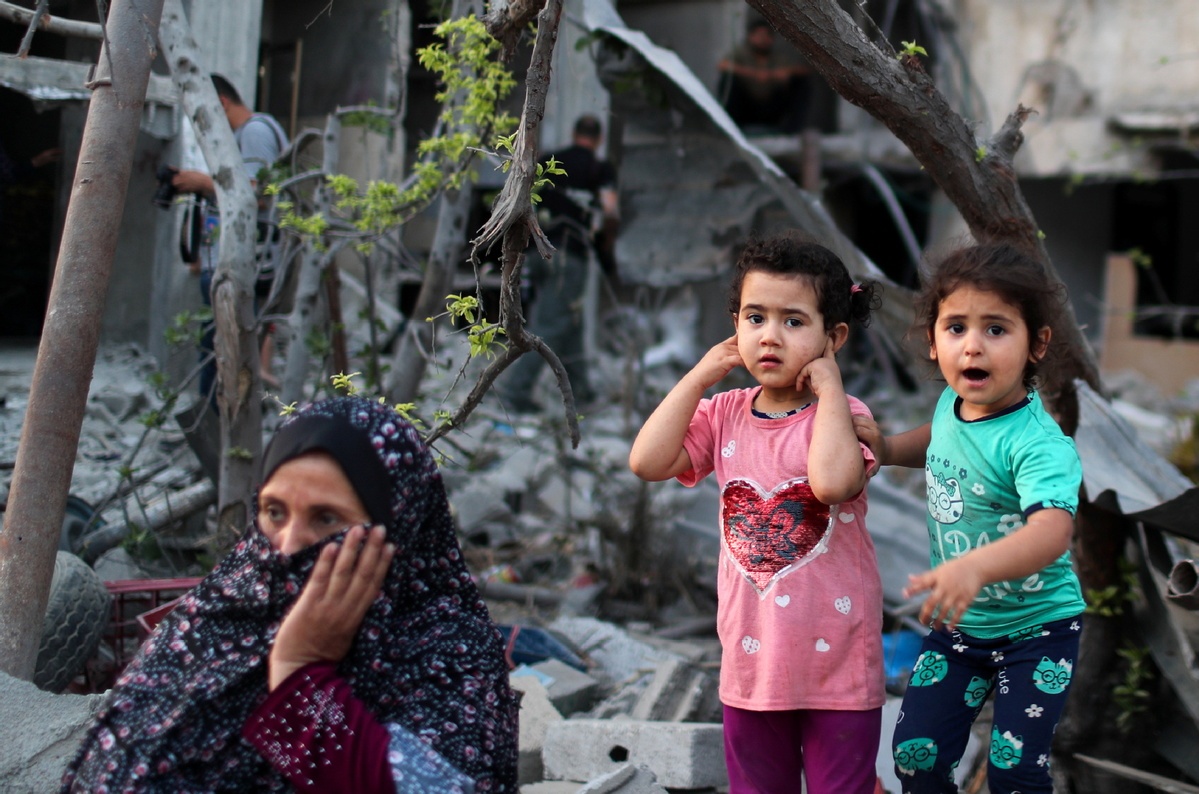 A Palestinian woman sits as two girls stand near houses destroyed during Israeli-Palestinian fighting, in the northern Gaza Strip on June 1, 2021. (Photo: Agencies)

Beijing has offered three new proposals for realizing the "two-state solution" in an aim to help end lasting conflicts between Palestine and Israel.

China is calling for efforts to empower the Palestinian Authority, to advance solidarity among all Palestinian factions and to resume Palestine-Israel peace talks.

The proposals were put forward as State Councilor and Foreign Minister Wang Yi made an official visit to Egypt on Sunday.

Beijing played a proactive role in cooling one of the worst Palestine-Israel flare-ups of tension in May as it continued mediating for peace with its presidency that month of the United Nations Security Council.

The value of the "two-state solution "has been endorsed amid rising sentiment in the international community that the independent statehood of Palestine should not be further delayed.

To empower the Palestinian Authority, China proposes granting it the power to exercise national sovereign functions in areas such as security and finance to help it effectively manage and control the autonomous and occupied Palestinian territories, according to Wang.

For greater solidarity among Palestinian factions, internal reconciliation should be achieved through consultations and talks so they can form a unanimous position to negotiate for settling the Palestinian issue, Wang said.

Palestine and Israel should be encouraged to resume peace talks on the basis of the "two-state solution", and China welcomes dignitaries of both sides to come to China for direct negotiation, he added.

Wang noted that Beijing, in a push for an early cease-fire, recently hosted a seminar that gathered individuals from both sides who support peace.

China calls for convening a global peace conference led by the UN, with participation by the UN Security Council's permanent members and all stakeholders in the Middle East peace process, in order to pursue a comprehensive, lasting and just settlement and the peaceful coexistence of Palestine and Israel, Wang said.

Shoukry and Aboul-Gheit said they agree with the ideas that China put forth. They praised Beijing's positive influence regarding the Palestinian issue and expressed readiness to closely communicate and coordinate with China on the issue.

They also voiced hope that the international community would urge Israel to stop establishing settlements in the occupied Palestinian territories and remove its blockade on the Gaza Strip.

During Wang's talk with the Egyptian foreign minister in Alamein, a coastal city in northern Egypt, China and Egypt decided to jointly donate 500,000 doses of COVID-19 vaccines to Palestinians in the Gaza Strip to address the immediate needs there.

Both countries believe that the humanitarian situation there should be given attention when seeking settlement of the Palestine issue, according to China's Foreign Ministry.

The two diplomats also attended a ceremony on Sunday marking the joint production of 1 million doses of COVID-19 vaccine in Egypt.

While meeting with Wang on Sunday, Egyptian President Abdel Fattah al-Sisi said he appreciated China's vaccine assistance and its help in achieving local production of vaccines.

A joint statement issued on Sunday by China's Foreign Ministry and the Secretariat General of the League of Arab States called for greater international cooperation in controlling the pandemic, preventing the further spread of COVID-19 and localizing vaccine production.

The statement voiced a shared objection to politicizing the pandemic and called for a scientific approach to tracing the origin of the virus.