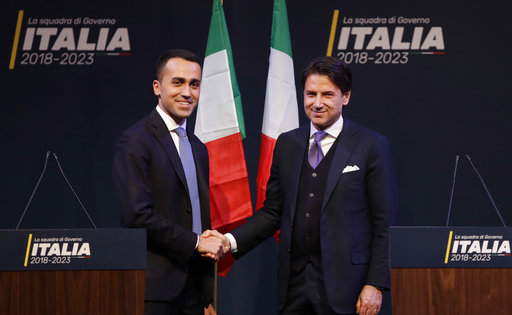 In this photo taken on Thursday, March 1, 2018, Giuseppe Conte, right, shakes hands with leader of the Five-Star Movement, Luigi Di Maio, during a meeting in Rome. (AP Photo/Alessandra Tarantino)

Born in Volturara Appulla, a small town near the southern city of Foggia, the 54-year-old premier candidategraduated from Rome University in law in the 1980s, and now lives in Rome, .As a lawyer, he has a big law firm in Rome, and is a law professor at Florence University.

According to Bloomberg, Conte has been one of the members of the Italian Space Agency. With a leftwing past, Conte has worked for the M5S on writing their justice section of the manifesto. But few people have heard of Conte, even though he was also a member of the council for administrative law. He quit after Di Maio wanted him to be a minister candidate during the election.

Last week, the Five Star Movement and Italy’s League finally reached an agreement on government programs they want to implement after the election. Italy is expecting a new premier for the coalition government and several candidates are listed.

However, speculation emerged about Conte's lack of political experience and educational claims. According to his CV, Conte has alleged that he studied at prestigious universities that include New York University and Cambridge University, but those universities have denied his claim on Tuesday.

Italy’s President Sergio Mattarella is taking his time to decide and respond to Giuseppe Conte’s nomination as Italy's new premier.