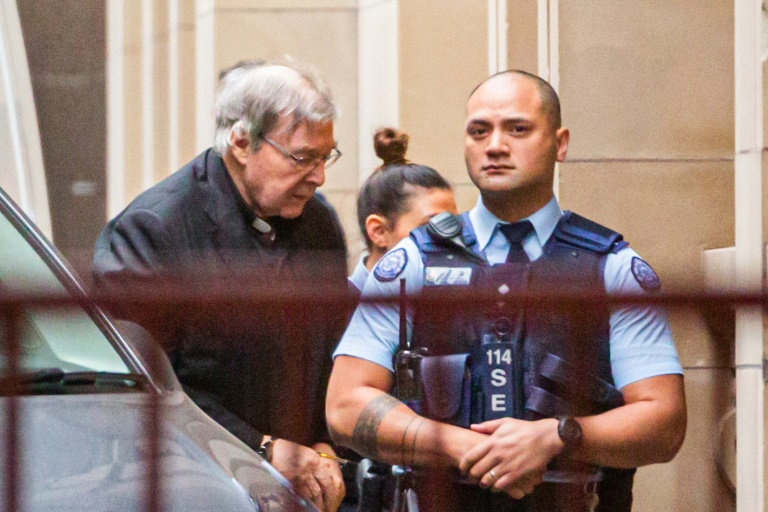 Australian Cardinal George Pell is escorted into the Supreme Court of Victoria in Melbourne, which is hearing his appeal against a landmark conviction for child sex abuse. (Photo: AFP)

Prosecutors insisted the conviction of Australian Cardinal George Pell for child sexual abuse was "unimpeachable" as his appeal against the guilty verdict went into a second day in Melbourne on Thursday.

But a prosecutor stumbled repeatedly as he sought to counter defence arguments that Pell's guilty verdict in December was unreasonable.

Lawyers for Pell, 77, had on Wednesday raised 13 objections to his conviction on five counts of sexual abuse for the assault of two 13-year-old choirboys following Sunday Mass in the 1990s.

The main point of their appeal is that the jury verdict was unreasonably dependent on the testimony of a single victim –- the second choirboy died in 2014 -- and that the surviving witness was not credible.

The former Vatican number three, who controlled the Holy See's vast finances and was involved in the election of two popes, was sentenced in March to six years in prison.

He was accused of sexually abusing the two choirboys in 1996 and 1997 in the sacristy and hallways of St Patrick's Cathedral when he was Archbishop of Melbourne.

In his opening remarks on Thursday, prosecutor Christopher Boyce rejected defence arguments that the victim's testimony was a "fantasy", saying if that were the case, "one would expect the cracks to appear".

But the prosecution said this did not happen and that the jury "were entitled to accept the complainant as a reliable and credible witness".

"When looking at the whole of the evidence, the integrity of the jury's verdicts is unimpeachable," the prosecutors said.

But Boyce struggled at several points to respond to questions from the three-judge panel, and he took a long pause after being made aware he had inadvertently named the surviving complainant in open court, contrary to legal rulings.

The hearing was live-streamed to the public, but a 15-second delay allowed the court to prevent the victim’s name being broadcast.

"This evidence constituted a catalogue of at least 13 solid obstacles in the path of a conviction," Pell's defence said in their submission.

Pell attended both days of hearings and on Thursday appeared engaged in the proceedings as he took copious notes on a yellow legal pad and at one point passed a post-it note to his legal team through a guard.

The other two grounds of Pell's appeal argue legal mistakes were made in not allowing Pell's defence to show the jury an animated video reconstruction depicting the movement of people in the cathedral following mass on the dates of the assaults, and that Pell was not arraigned in the presence of the jury.

Walker argued Pell's mingling with congregants after mass on Sundays provided him with an alibi.

"If he was at the western door (of the cathedral) then the law of physics tells us this is literally, logically impossible for the offending to have occurred," he said.

Three judges of Victoria State's Supreme Court -- Chief Justice Anne Ferguson, President of the Court of Appeal Chris Maxwell and Justice Mark Weinberg -– are hearing the appeal and will make a decision on whether to reject the appeal, acquit Pell or order a retrial.

A first trial in Pell's case last year ended in a hung jury. He was convicted in December at the end of a second trial.

Both trials were hidden from the public until a wide-ranging gag order was lifted in February after a second tranche of charges against Pell, involving alleged incidents in a swimming pool in his home town of Ballarat in the 1970s were dropped.

Since his conviction, Pell has been removed as the Vatican finance chief and lost his place in the so-called C9 Council of Cardinals that are effectively the Pope's cabinet and inner circle of advisers.

The Vatican has opened its own probe into Pell's actions. If his conviction is upheld, it could lead to his expulsion from the priesthood.