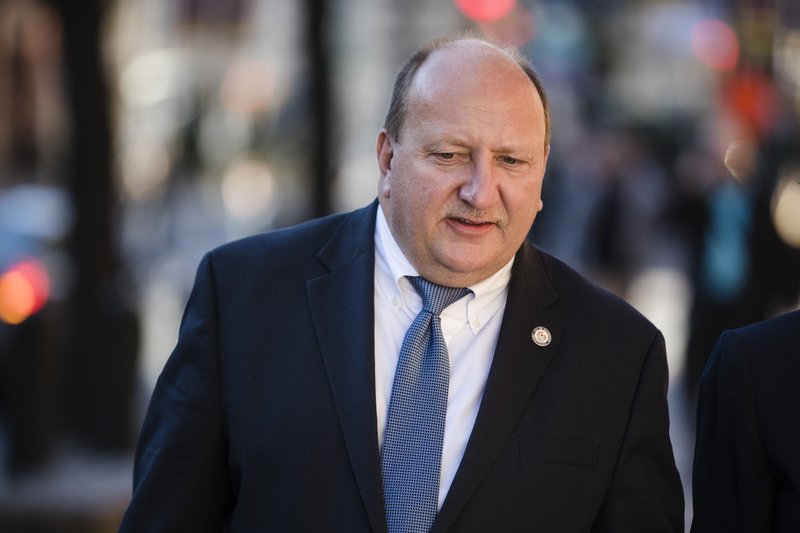 Federal prosecutors on Friday urged a Pennsylvania mayor convicted on dozens of corruption charges to resign immediately, calling him unfit to serve even before a jury determined he had sold his office to campaign donors.

Allentown Mayor Ed Pawlowski was convicted of strong-arming city vendors for campaign cash in a wide-ranging scheme meant to fuel his political ambitions for statewide office. The Democrat cried in court as the verdict came down Thursday, and his wife collapsed in a hallway.

“He couldn’t serve the people before, he can’t serve the people after he’s been convicted, and a jury has spoken and he is facing many, many years in jail,” U.S. Attorney Louis Lappen said at a news conference in Philadelphia. “He needs to get his affairs in order and address his criminal situation and leave the city in the hands of somebody who’s not corrupted.”

“He has disgraced his office and cheated the people of Allentown,” said Wolf’s spokesman, J.J. Abbott.

Authorities say Pawlowski masterminded a scheme to rig city contracts for legal, engineering, technology and construction work, all in a bid to raise money for his statewide political campaigns. Pawlowski ran unsuccessfully for governor and U.S. Senate.

The jury convicted him of dozens of charges, including conspiracy, bribery, fraud, attempted extortion and lying to the FBI. Sentencing has not been scheduled.

The Chicago native, who led his adopted city for 12 years and was re-elected to a fourth term while under indictment, is required by state law and the city charter to forfeit office. His lawyer, Jack McMahon, said no decision has been made about when that might happen.

The conviction is a “devastating blow” to Pawlowski, who respects the jury’s verdict but continues to maintain his innocence, McMahon said.

“He totally believes he never did anything wrong,” he said. “This is a guy that I’ve come to know pretty well, and he’s a pretty good guy. I’ve been around a lot of crooks in my life and this is not one that I feel that way about.”

He kept up appearances throughout the 5 1/2-week trial, responding to emails, texts and phone calls about official city business, signing documents and running a weekly meeting. Pawlowski showed up at City Hall — a block from the federal courthouse where he stood trial — a few times a week.

Now Allentown, a city of 120,000 people about 60 miles north of Philadelphia, will need a new leader barely two months after Pawlowski began a new term.

Under the city charter, the City Council president will serve as mayor until council appoints an interim mayor, who will serve until the November 2019 municipal election.

The city’s website still featured Pawlowski’s biography and photo Friday, along with his appearance in a promotional video. “Ed Pawlowski is a leader with skills honed by experience,” the biography said.

There was no mention of the dark cloud that’s been hanging over City Hall since July 2015, when FBI agents raided municipal offices and their pay-to-play investigation became public.