"Without smoke, there's no progress," said the Amazon rancher in a torn straw hat and cowboy boots caked in red dirt. 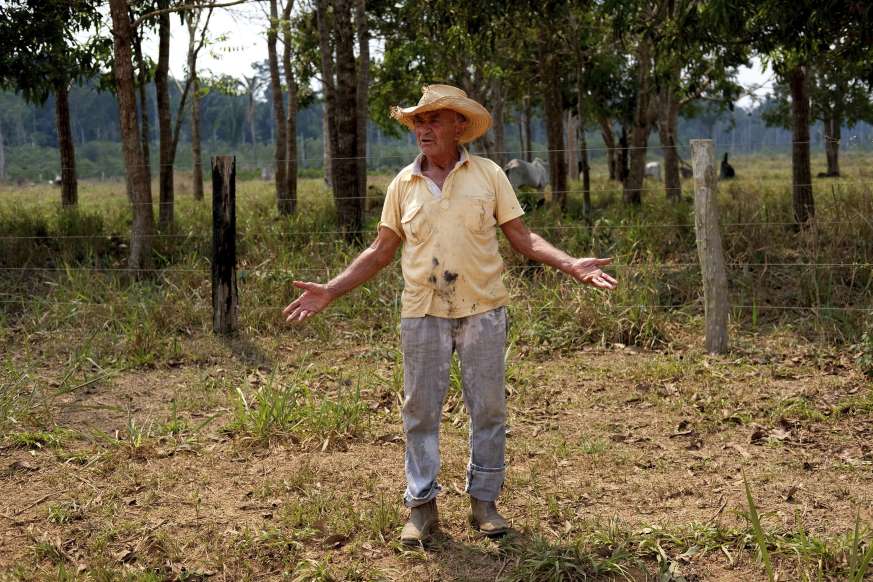 Antonio Lopes da Silva, a 75-year-old livestock farmer, poses for a photo at Vila Nova Samuel, in the Amazonian state of Rondonia, Brazil, Thursday, Aug. 29, 2019. Lopez Da Silva said the Amazon must be protected, but he also believes that that regulated fires to clear land for pasture are needed for the region and Brazil, to prosper amid a struggling economy. (Photo: AP)

The rancher, 75-year-old Antonio Lopes da Silva, was talking about the fires that have swept parts of one of the world's most precious regions in recent weeks. People around the world reacted with shock at what they consider a monumental threat to the environment, but for many living in the Amazon, land-clearing fires mean survival and development.

"If you don't burn, you can't live. But it has to be well organized" and in line with the law, said da Silva, who provides pasture for his 200 cattle.

The strain between protecting and developing the Amazon, which encompasses vast rainforests as well as mid-size cities, farms and logging operations, will surely intensify even after this year's fires subside.

The Amazon, about 60% of which is in Brazil, is a buffer against climate change that is crucial to the planet's health, scientists say. It is also an engine for growth whose huge spaces and natural resources are being harnessed relentlessly to help boost Latin America's biggest economy.

Rainforest makes up much of the Amazonian state of Rondonia, where da Silva lives. At 238,000 square kilometers (92,000 square miles), Rondonia is about the size of Ecuador.

Vila Nova Samuel, a small frontier town, is on the fringes of the Jacunda National Forest, where some fires have occurred. Residents drive motorcycles on dirt roads lined with tire repair shops and bars where bare-chested men offer cold beer. The town is dotted with sawmills that are the backbone of its economy.

Fires are set annually in Brazil, and some are legal. But the rate surged this year, leading to speculation that ranching and other business interests eager to expand holdings were emboldened by President Jair Bolsonaro's economic development campaign. Stricter enforcement of environmental laws between 2004 and 2014 sharply curbed the rate of deforestation, but critics say the state agency in charge of protecting the rainforest is being systematically weakened under Bolsonaro.

After an international outcry, his government banned setting legal fires for 60 days for land-clearing to try to rein in the burning, some of which has happened in already deforested areas.

On Thursday, many people in Vila Nova Samuel didn't want to talk about the ban, a sensitive subject. Some said they feared state reprisals if they criticized it.

Tens of thousands of Brazilian troops have been made available to help put out the fires, according to Bolsonaro, who has bristled at European criticism of his environmental record.

Near Vila Nova Samuel, a jungle infantry brigade accompanied firefighters and agents of the country's environmental enforcement agency to a brush fire that threatened to consume a wooden shack, the home of farmer Adaa Raauwendaal and his family.

Inside the dirt-floor shack, Raauwendaal said he wasn't to blame and that it was the second time in days his home had nearly been consumed by fire. The family has four cows and some chickens.

"The fire doesn't stop," Raauwendaal said. "We do our best to put it out before it burns through everything we own."

Environmental officials in camouflage photographed the blaze as yellow-clad firefighters sprayed the flames with jets connected to backpacks filled with water. When the water ran out, Raauwendaal's 19-year-old son, Eric, walked through the charred bushes in rubber flip-flops to deliver two buckets of water. A soldier did the same.

Eric Raauwendaal also picked up a calf that he said was ill and had trouble standing on its own.

"These fires happen every year," he said. "From what I've seen on TV, the Amazon is the largest forest in the world, so we have to protect it."

Investigators said there was no evidence that the Raauwendaal family had set the fire.

The army brigade has set up a barracks deep inside a national park. Jeeps and ambulances were parked in the forest close to a pile of huge logs legally owned by a timber company.

Some soldiers handled equipment and waited for the convoy to return from firefighting missions, while others napped on hammocks, exhausted from the search for illegal fires in the rainforest. Orange butterflies fluttered nearby.

During the missions, red motorcycles with sirens followed the military jeeps and camouflage-painted ambulances in what seemed like an off-road rally through the jungle. Maj. Fabio da Paixão Pinheiro said rain has doused many fires in the recent days.

"The damage would have been much worse if our team had not arrived," he said about the blaze at the Raauwendaal land that had leaped from a barbed-fenced field into the forest. "The vegetation is really dry."

Still, even with the military's efforts, the task of locating and extinguishing fires across the vast Amazon seems overwhelming.

On Thursday, a cacophony of calls from toucans and howling monkeys emanated from the lush forest of towering nut trees near Vila Nova Samuel. But many areas had been charred to ashes.

Da Silva said he knows what needs to happen.

"The Amazon needs to organize its lands," the elderly rancher said. "Better roads, because we don't have any."