The World Health Organization has called for improved security for medical workers trying to contain an outbreak of the Ebola virus in a conflict-ridden part of the Democratic Republic of Congo, or DR Congo. 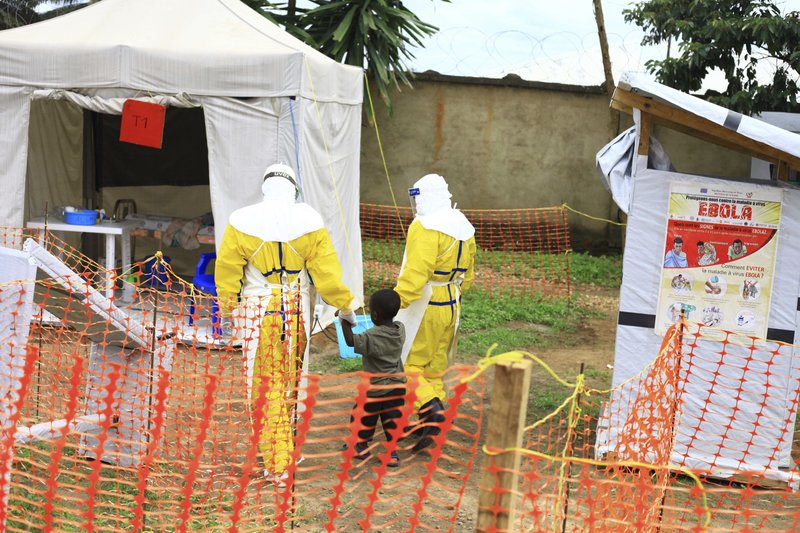 In this Sunday, Sept 9, 2018 file photo, health workers walk with a boy suspected of having the Ebola virus at an Ebola treatment centre in Beni, Eastern Congo. The World Health Organization says the risk of the deadly Ebola virus spreading from Congo is now "very high" after two confirmed cases were discovered near the Uganda border. The outbreak in northeastern Congo is larger than the previous one in the northwest and more complicated for health officials with insecurity from rebel groups. As of Friday, Sept. 28 there were 124 confirmed Ebola cases including 71 deaths. (File photo: AP)

Tedros Ghebreyesus, director-general of WHO, said that ending the outbreak that has claimed more than 2,000 lives since August 2018 cannot be done without more efforts to improve the security of healthcare workers who are often targeted for attacks.

Ghebreyesus was speaking on Sunday when he visited some of the workers caught up in recent armed attacks that killed four of their colleagues and left seven others injured in the DR Congo.

"I came here today to stand side by side with you, my sisters and brothers, and commend you all for your compassion and bravery in this most trying of times," he said. "You have put your lives on the line to protect the health and well-being of others."

On Nov 27, unidentified armed attackers launched separate attacks on a camp housing health workers near the Biakato Mines and on an Ebola coordination office in Mangina.

The attacks were the latest in a series of incidents this year. WHO has documented 390 attacks on health facilities that have killed 11 and injured 83 healthcare workers and patients in the DR Congo.

Despite the disruptions, WHO and its partners in eastern DR Congo have committed to continuing their Ebola response operations.

During Ghebreyesus' visit, several frontline workers recounted their experiences of being confronted by attackers and stressed their commitment to working to end the Ebola outbreak in memory of their fallen colleagues.

"You cannot face Ebola and bullets without commitment, and that's why I am so proud of you," Ghebreyesus said. "Even though we shouldn't give up, your security must be ensured."

Ghebreyesus expressed concerns that the attacks have frustrated the efforts to end the largest Ebola outbreak reported in the country and what he called the worst ever recorded anywhere.

"Every time an attack like this happens, it disrupts efforts to contain the Ebola outbreak and puts the health and well-being of local men, women and children at greater risk. Such senseless violence must stop," he said.

The Ebola outbreak in the DR Congo was declared a public health emergency of international concern on July 17.

Because the outbreak is in areas with cross-border population flows - potentially affecting Rwanda, South Sudan, Burundi and Uganda - it remains of particular concern, Ghebreyesus said.