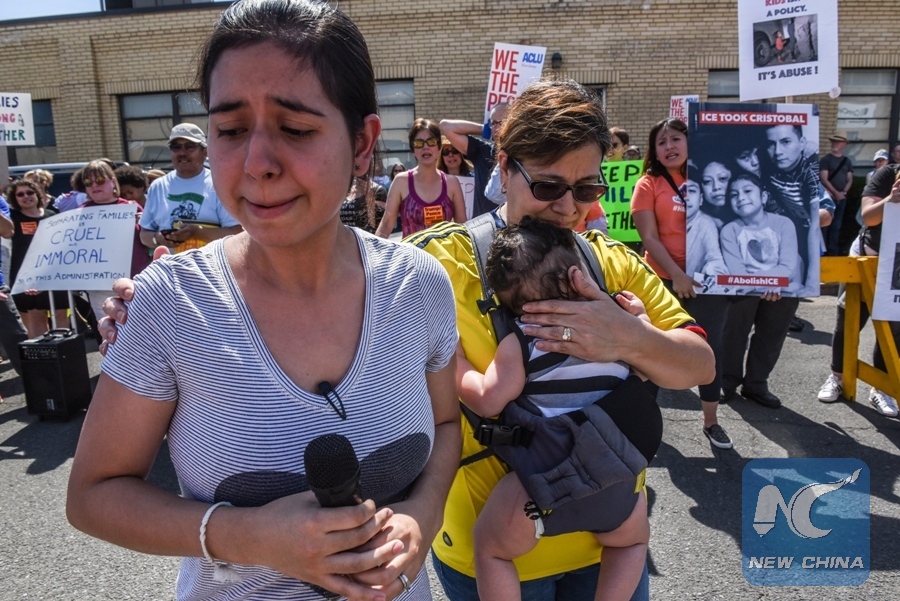 Sharon Chajon whose husband is a detained immigrant cries while people participate in a protest against recent US immigration policy of separating children from their families when they enter the United States as undocumented immigrants, in front of a Homeland Security facility in Elizabeth, NJ, US, June 17, 2018. (Photo: Xinhua)

Hundreds of people rallied Sunday in Westlake Park in Seattle, the largest city in the US west state of Washington, to protest against what organizers said the child-separation immigration policy currently pursued by US President Donald Trump.

The rally, which started at noon on Father's Day Sunday in Westlake Park, was part of a nationwide demonstration to protest the border separation of children from their parents, Seattle-based K5News TV channel reported.

The protest for "Families Belong Together" in Westlake Park was organized by the NW Immigrants Right Project, CAIR Washington, the American Civil Liberties Union Foundation (ACLU) of Washington and the group behind Womxn's March Seattle.

One of the group said Congress has the power to stop tearing families apart because all families belong together.

A protester said in her Facebook post that "there was a high attendance of families at Westlake Park to support the families seeking asylum."

Media reports said more than 1,600 immigrants, including some parents whose children were taken away from them by US immigration officers, have been sent to federal prisons in five states in an unprecedented move last week.

They were marked for expedited deportation under the stringent immigration policy of Trump's administration.

The Trump administration has been criticized over past few days for cracking down on illegal immigration with a "zero-tolerance" policy of separating families at the US border.

Nearly 2,000 children were separated from their families during a six-week period in April and May, according to the media reports.