Hundreds of protesters in Indonesia's restive Papua province set fire to homes and other buildings Monday in a protest sparked by rumors that a teacher had insulted students, and a soldier was killed in another protest in the region, police said. 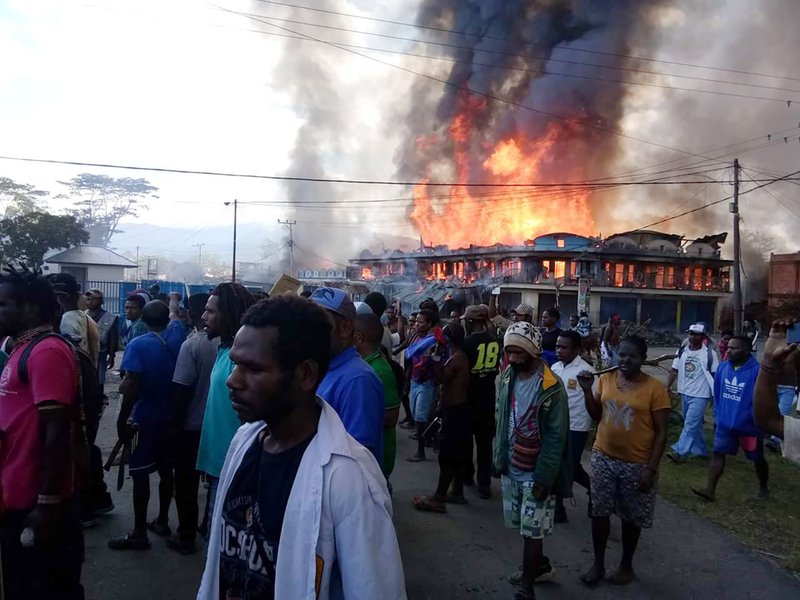 People gather as shops burn in the background during a protest in Wamena in Papua province, Indonesia, Monday, Sept 23, 2019. (Photo: AP)

Rodja said the protest was triggered by allegations that a high school teacher in Wamena who is not from Papua called an indigenous Papuan student "monkey" last week.

He said that a police investigation did not find any racism against the student, and that false rumors have been spreading among students in other schools and native communities.

"We believe this false information was intentionally designed to create riots," Rodja told reporters in Jayapura, the capital of Papua province. "This is a hoax and I call on people in Papua not to be provoked by untrue news."

Papua police spokesman Ahmad Musthofa Kamal said in a statement that students from another school in Wamena who refused to join the protest brawled with another group of students.

Video circulated on the internet showed dozens of people, many armed with machetes, standing in front of their shops and homes to protect them from the angered mob.

An airport official in Wamena, Joko Harjani, said Monday's protest forced authorities to close the city's airport. It will remain closed until the situation returns to normal.

The protest came days after Indonesian authorities managed to get the province under control after weeks of violent protests against alleged racism in the region by thousands of people in Papua and West Papua provinces. At least one Indonesian soldier and four civilians were killed in that violence.

The previous protests were triggered by videos circulated on the internet showing security forces calling Papuan university students "monkeys" and "dogs" in East Java's Surabaya city when they stormed a dormitory where Papuan students were staying after a torn Indonesian flag was found in a sewer.

The videos prompted hundreds of Papuan students who study in other Indonesian provinces to return home and force a local state university to accommodate them by establishing posts that were not approved by the authorities or the university.

Papua military spokesman Lt. Col. Eko Daryanto said in a statement that at least one soldier was killed Monday when police, backed up by soldiers, forced the protesters off the campus.

A mob of angry students attacked a soldier with machetes, Daryanto said. The soldier died on the way to a nearby hospital. At least two police officers were injured.

Conflicts between indigenous Papuans and Indonesian security forces are common in the impoverished Papua region, a former Dutch colony in the western part of New Guinea that is ethnically and culturally distinct from much of Indonesia.