Protesters clash with police as Spain cabinet meets in Catalonia

Catalan pro-independence groups blocked roads and clashed with baton-wielding police on Friday in protests against a Spanish government cabinet meeting in Barcelona which separatists branded a provocation. 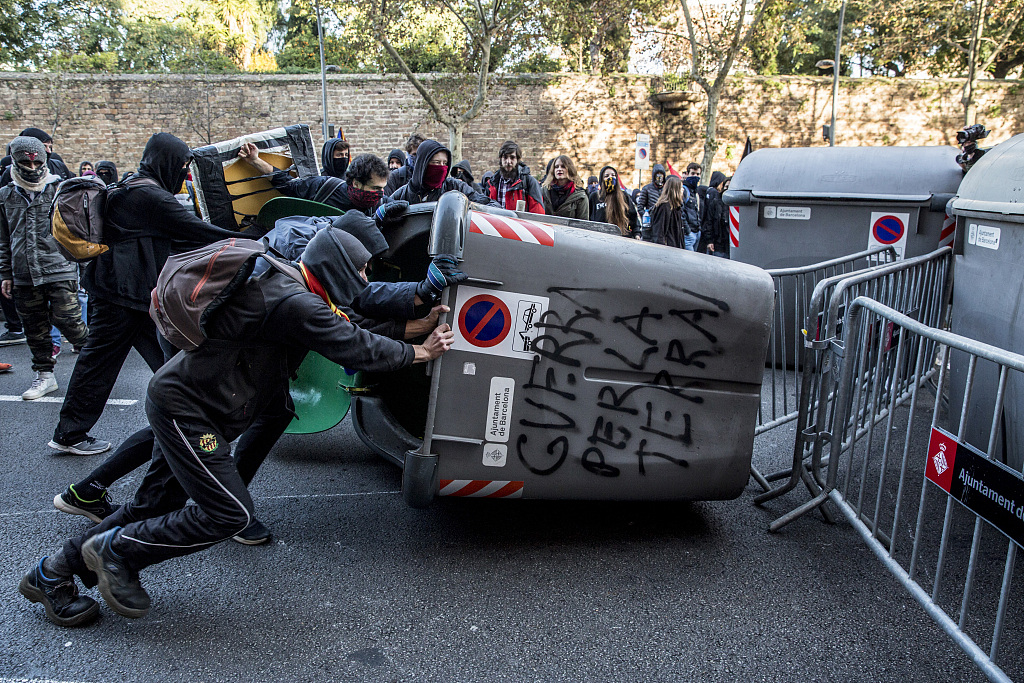 The weekly cabinet meeting usually takes place in Madrid but Prime Minister Pedro Sanchez's Socialist government decided to hold it in the Catalan capital as part of its efforts to reduce tensions.

It appeared to have the opposite effect in some of streets of the capital of the northeastern region, which last year made a failed attempt to break away from Spain.

AFP reporters saw lines of riot police lashing out with their batons as they charged a crowd of some 200 protesters.

Protesters threw metal barriers and stones at officers and tried to breach a police barrier a few hundred metres (yards) from where the meeting was taking place.

Sanchez and the head of Catalonia's separatist government, Quim Torra, have expressed a commitment to an "effective dialogue" to try to resolve the dispute over the wealthy region's status within Spain.

The government was aiming to use the cabinet meeting to approve a 22 percent increase in the minimum wage, a pay hike for public workers and announce investments in infrastructure projects in Catalonia.

But the timing of the meeting was delicate: a year to the day after Madrid held snap elections in the region after blocking its move for independence.

"This is a provocation. They have come here to provoke us," said one demonstrator, textile worker Carles Serra, 45.

Spain's wealthiest region, Catalonia is home to some 7.5 million people and has its own language.

A radical separatist group, the Committees for the Defence of the Republic (CDR), blocked a dozen main roads from around dawn on Friday, regional transport authorities said.

"We will be ungovernable on December 21," the group repeatedly tweeted.

A grassroots separatist organisation, ANC, urged supporters to block the streets of Barcelona on Friday with their vehicles.

About 20 pro-independence groups, including the ANC, called on their supporters to march through the streets of Barcelona at 6:00 pm (1700 GMT).

The Spanish government sent police reinforcements to Barcelona and Catalan leaders repeated their call for protests to be peaceful.

The regional police force said at least one demonstrator was arrested for carrying material that could make an explosive or incendiary device.

Catalonia declared independence in October 2017 after pushing ahead with a banned independence referendum, but Spanish authorities stifled the attempt. Several Catalan independence leaders were detained and charged.

Sanchez took office as prime minister eight months later after winning a surprise vote of no-confidence against the previous conservative government with the support of Catalan separatist parties.

Sanchez initially adopted a more conciliatory tone towards Catalonia than his conservative predecessor but the effort to ease tensions with the region have hit a wall.

Sanchez and Torra were photographed holding talks in Barcelona on Thursday night, drawing fire from the premier's political opponents as well as separatists.

The leader of the conservative opposition Popular Party in parliament, Dolors Montserrat, branded the meeting "shameful" and "a betrayal of Spain".

"Dialogue seems like a step backwards to me," said separatist demonstrator Mariona Godia, 35. "That just looks like a photo aimed at calming people down."

"We know that the initial positions are very divergent," Catalan government spokeswoman Elsa Artadi said. "But we have to see how we can advance."