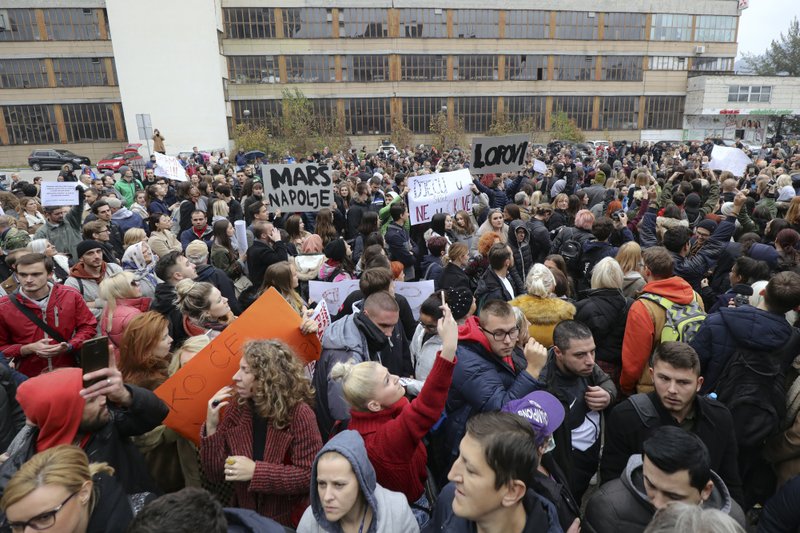 Around 1,000 people protested outside a government building in the Bosnian capital of Sarajevo after an opposition lawmaker published shocking photos of special needs children tied to beds and radiators in a nearby government facility.

The protest included scores of parents and relatives of children with disabilities, who vividly described a dysfunctional care system that condemns their kids to suffering.

Sabina Sunic, who has a 17-year-old daughter with Down syndrome, voiced the fears of many parents.

“When we die there is no system, they will tie up all our children,” she said.

Sunic said her daughter is “very happy and accomplished,” but only because she is being cared for by her parents who, like everyone else in their situation, receive no assistance from the government.

The protest came a day after lawmaker Sabina Cudic of the opposition Nasa Stranka party publicly shared the disturbing photos from the Pazaric care home, outside Sarajevo, and demanded that they be debated in the parliament.

“This is not a shock to the government, there is a long line of documented, systemic abuse of funds and the patients,” Cudic told The Associated Press in an interview.

“Just two months ago, they made a very explicit statement that they are very satisfied with the conditions in Pazaric.”

The Pazaric care home, which has 149 employees, 27 of whom are economists, is already being investigated after a new manager, who took over last spring, warned authorities of alleged corruption by his predecessor.

Cudic said an official report by Bosnia’s tax authority, presented to the government over a month ago, documented a high degree of wrongdoing at the care home.

Aside from questions of financial mismanagement, the home has faced fierce criticism for the level of care provided.

According to Cudic, the home did not have a professional therapist until a year ago and the night shift was covered by only one untrained individual.

“I could give proper care and compassion to the children in Pazaric, but while I am trained, I am not (politically) suitable,” said Nikolina Toljagic, an unemployed social worker who joined Thursday’s protest.

Cudic’s initiative for an emergency debate was rejected, prompting thousands of Bosnians to publish the names of the lawmakers who refused to debate Cudic’s claims on social networks in an apparent attempt to shame them.

“The government perceives the institutions (for special needs children) as a profit-making solution,” said a visibly shaken Aida Hrnjic, who is raising her 7-year-old autistic son at home. “It is very obvious that they do not care about children.”

On Thursday, the European Union’s office in Bosnia issued a statement describing the published photos as shocking and appalling. It called on authorities “to thoroughly investigate these allegations immediately and to ensure swift and proper institutional follow up.”

More protests have been called for Friday.