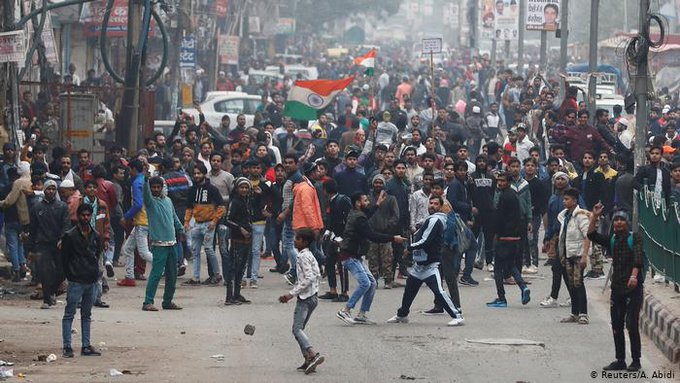 Fresh protests broke out across India on Wednesday as authorities banned large gatherings in parts of the capital in an effort to contain nationwide rallies and riots against a citizenship law seen as discriminating against Muslims.

The demonstrations over the past few days have turned violent, with six people dead in the northeastern state of Assam and with police firing tear gas and arresting hundreds of people.

In the financial capital Mumbai, hundreds of people under tight security carried placards with the words "India is ours" and chanted "we are all one".

"We just cannot go along with this bill. I can't believe we now have to prove our citizenship after living in India for so many years," Tabeer Rizvi told AFP as the Mumbai crowd burst into a Hindi version of the US civil rights movement anthem "We shall overcome".

"I am not surprised to see people of all religions come out to protest this bill."

The law allowing New Delhi to grant citizenship to non-Muslim nationals from three neighbouring countries comes in the wake of other policies from Prime Minister Narendra Modi's government that critics said were designed to marginalise Muslims in the Hindu-majority nation.

Demonstrators, mostly young people, again gathered outside Delhi's Jamia Millia Islamia university as the ban on gatherings of more than four people was imposed in some Muslim-dominated districts of the city.

"We are really very angry with the BJP (Bharatiya Janata Party) government... They have taken racism to the extreme point," Taiba Hadis, 18, told AFP at the rally.

"They are questioning our existence and it is high time for us to speak up."

Rallies were also held in other states including West Bengal, Tamil Nadu, and Telangana.

There were sporadic clashes between police and demonstrators in some cities as well as small counter-protests.

The latest round of protests came as the Supreme Court rejected pleas for an immediate stay on the legislation, but deferred the case to January for extensive hearings.

Petitioners have said the legislation is unconstitutional and goes against India's cherished secular traditions.

Demonstrations tipped to attract huge crowds were planned for Thursday in major cities across the vast nation.

At least 21 people, including 12 policemen, were injured in the Delhi clashes in Seelampur district on Tuesday, with police firing tear gas after thousands of protesters threw stones and set fire to buses and a police outpost.

Another six people were arrested in West Bengal state for hurling a bomb at policemen on Tuesday that injured seven officers.

In Uttar Pradesh, more than 110 people were arrested over the protests, or for posting on social media, police told AFP.

Hostels at the state's Aligarh Muslim University, where police brutality was alleged by students on Sunday, were emptied after residents were told by the administration to start winter vacations early.

In Gujarat state, five people were arrested for drawing a Nazi symbol beside the Modi's ruling BJP party's lotus logo on the wall of the police headquarters in Vadodara city.

Modi has remained defiant in the face of the protests and said the law would not affect Indian nationals but protect persecuted Hindu, Sikh and other minorities from Muslim-majority neighbours.

The UN secretary-general's spokesman Stephane Dujarric said Tuesday the global body was "concerned about the violence and alleged use of excessive force by security forces that we've seen that have been taking place".

"We very much call for restraint and urge full respect for the rights of freedom of opinion and expression and peaceful assembly," he added.

Authorities have imposed internet blackouts and used force to shut down rallies and sit-ins, but protesters have vowed to keep up their fight until the law is revoked.