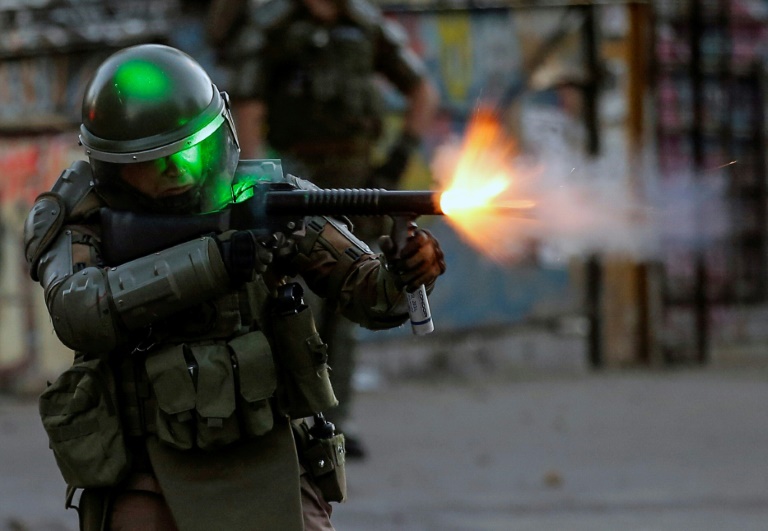 Hundreds of demonstrators marched towards the Costanera Center, South America's largest shopping mall and a complex that includes the region's tallest building -- a symbol of the economic expansion that has made Chile one the region's most stable countries.

A phalanx of riot police stopped the demonstrators, firing water cannons and launching tear gas to disperse the crowds that gathered at the mall.

The demonstrations then spilled into the wealthy Providencia neighborhood, the hub of Chile's financial sector, where protesters lit fires, battled with police, looted a pharmacy and at least two banks, and damaged government buildings.

"We are living a level of violence and destruction never seen before," said Providencia mayor Evelyn Matthei.

Social media messages also called for a rally at the United Nations Economic Commission for Latin America and the Caribbean, located in the upmarket Vitacura district.

"The time has come to get to the east," said one message, indicating the upscale areas of the capital.

"People are rather sad and scared about how the country can return to normalcy," said Andrea Ortega, a 43-year-old lawyer who left her office early to look after her children, fearing rioting in an area hitherto unscathed by the violence.

Demonstrations in Chile, which have already left 20 people dead, have been growing smaller but more violent in recent days.

At the same time, complaints about excessive force by police and soldiers have also been on the rise and include charges that police killed, tortured and sexually assaulted civilians during the weeks of protests.

Prosecutors say five of the 20 deaths recorded in the protests against high living costs were suspected to have been at the hands of security forces.

"We have been totally transparent about the figures because we have nothing to hide," Pinera said Wednesday.

The Washington-based Inter-American Commission on Human Rights also asked Pinera's authorization to send a mission to Chile at the request of human rights groups.

Pinera said state agents who committed abuses would be punished just as severely as those who carried out vandalism or violence in the protests.

He has reshuffled his government and announced a series of measures aimed at placating the protesters.

In the latest of these, on Wednesday he signed a law guaranteeing a minimum monthly wage of some $467.

But protesters have continued demanding that the right-wing billionaire president step down.

Pinera said in a BBC interview broadcast Tuesday that he would not resign over the protests.