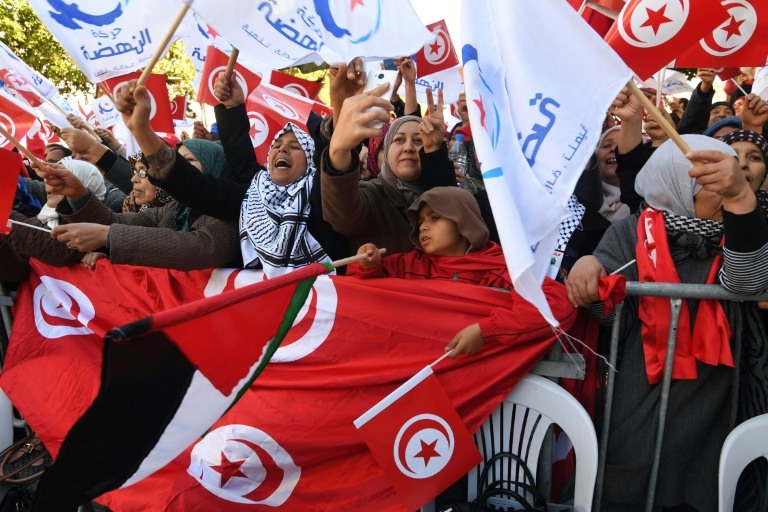 Tunisians on Sunday marked seven years since the uprising that launched the Arab Spring, with fresh protests after days of unrest over persisting poverty and unemployment.

The North African country is seen as having had a relatively smooth democratic transition since the January 14, 2011 toppling of President Zine El Abidine Ben Ali after 23 years in power.

But seven years later, anger has risen over new austerity measures after a year of rising prices, with protests again chanting the 2011 slogans of "Work, Freedom, Dignity".

On Sunday, hundreds gathered in the capital Tunis, responding to calls to protest from a powerful labour union and several political parties.

Security was tight as protesters poured through checkpoints into the capital's Habib Bourguiba Avenue, which was the epicentre of the 2011 protests.

Demonstrators chanted against "poverty and hunger" as they marched up the avenue, accusing "thieves" of having stolen the country.

Outside the offices of the powerful UGTT trade union, demonstrator Foued el-Arbi waved an empty basket marked 2018. "This empty basket sums up our situation seven years after the revolution," said the philosophy professor.

A wave of peaceful protests and night-time unrest hit cities and towns across the country this past week, after hikes in value-added tax and social security contributions introduced in early January.

The interior ministry says it has arrested more than 800 people suspected of taking part in violence, theft and looting since the start of the unrest.

Protester demands have included a review of the 2018 austerity budget and more efficient measures to fight enduring corruption.

More than 1,000 people took part in the protest outside the UGTT offices. "The people want the fall of the 2018 budget," some chanted, echoing 2011 calls for the fall of the regime.

President Beji Caid Essebsi marked the anniversary by attending the opening of a youth centre in the working-class Tunis suburb of Ettadhamen, which saw night-time clashes between young protesters and police this week.

"This year we will start to take care of the young," he said. "The revolution for freedom and dignity... was in effect led by the young."

Several local residents turned out to air their frustration. "He says he will help us, and then he goes back to his palace," said Mouna, a high school student.

Tunisia's 2011 revolt was sparked by the self-immolation of a fruit seller in desperation at police harassment and unemployment.

On January 14, 2011, Ben Ali fled to Saudi Arabia, inspiring similar revolts across the region in what became known as the Arab Spring.

Tunisia has been praised for its steps towards democracy in the years since, compared to countries now wracked by war such as Syria or Yemen.

A new constitution was adopted and legislative and presidential polls held in 2014.

But authorities have struggled to redress Tunisia's economy, including after deadly jihadist attacks in 2015 dealt a major blow to the key tourism sector.

Seven years on, youth unemployment is more than 35 percent, according to the International Labour Organization, while inflation reached more than six percent at the end of last year.

On Saturday, Essebsi announced an increase in aid to the needy and improved health care as part of social reforms. The action plan, costing more than 70 million dinars ($28.5 million), will benefit more than 120,000 Tunisians, according to the authorities.

Tunisia has secured a 2.4-billion-euro ($2.9-billion) IMF loan in return for a reduction in its budget deficit and financial reforms.