WORLD Protests over George Floyd’s death spread across US

Protests over George Floyd’s death spread across US 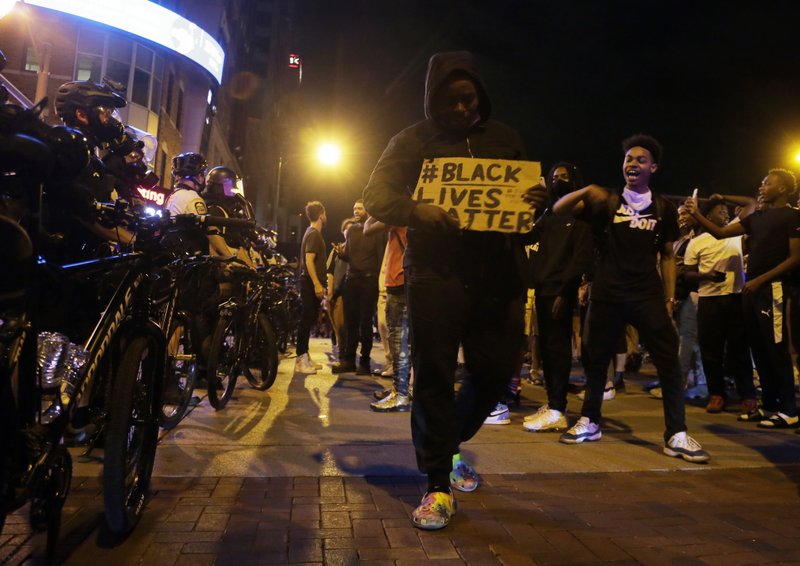 Protesters hold signs and walk past a line of police in downtown Columbus, Ohio, Thursday, May 28, 2020, during a demonstration over the death of George Floyd in police custody Monday in Minneapolis. (Photo: AP)

Developments across the United States in connection with the death of George Floyd in Minneapolis police custody:

ORLANDO, Fla. — A group of about 10 protesters gathered Friday near a Florida town home that belongs to a white Minneapolis police officer who knelt on George Floyd’s neck.

The protesters gathered after social media postings that listed the address of Derek Chauvin in the community of Windermere outside Orlando.

They’re carrying sings that say, “He said I can’t breathe. Justice for George,” and “We see you, we hear you ... we love you! #Justice for George.” The handcuffed black man pleaded for air as a white police officer knelt on his neck during an arrest recorded on vide by bystanders.

The Orange County Sheriff’s Office tweeted from its official account that Chauvin is not at the residence and is not expected there. The office says it’s confirmed he has no plans to be in the area.

ALBUQUERQUE, N.M. — Albuquerque police used a helicopter and tear gas as they retreated from a crowd of people after a confrontation that followed a protest of the death of George Floyd in Minneapolis police custody.

During the confrontation, protesters waved signs and yelled at officers clad in riot gear. Gallegos said Friday the tear gas was used to allow officers to leave the area and avoid further confrontation.

There were no reports of injuries from the gunshots, and it wasn’t clear whether that incident was related to the protest. Gallegos also said there were no injuries resulting from the confrontation with protesters.

FONTANA, Calif. — Nine people were arrested after rocks were thrown at businesses, vehicles and officers during a Southern California protest stemming from the death of a black man in Minneapolis police custody.

The violence erupted Thursday night in Fontana as about 100 people moved up and down a thoroughfare and blocked traffic. Police say an unlawful assembly was declared and the crowd was ordered to disperse but some persisted.

Elsewhere in the region, demonstrators gathered outside Los Angeles police headquarters but there was no repeat of Wednesday evening’s action in which protesters blocked freeway traffic and attacked two Highway Patrol cruisers.

Fontana is an inland city about 50 miles (80) kilometers east of Los Angeles.

COLUMBUS, Ohio — Protesters angry over the death of George Floyd in Minneapolis police custody turned out for a demonstration in Columbus that began peacefully but turned violent, with windows smashed at the Ohio Statehouse and storefronts along surrounding downtown streets.

The crowd of about 400 people entered into a standoff with Columbus police Thursday night, blocking the intersection of key streets in the Ohio capital for hours, the Columbus Dispatch reported.

The demonstration began as a peaceful protest, but news outlets reported protesters began throwing objects like water bottles at officers, who responded by using tear gas on the crowd. A scuffle between a protester and an officer broke out around 9:45 p.m., WCMH-TV reported.

Videos obtained by The Associated Press show people smashing the building’s windows. One person briefly entered an office through a broken window but retreated before troopers within the building could catch him, said Ohio State Highway Patrol spokesman Lt. Craig Cvetan.

Windows were boarded up early Friday and workers were placing plywood over undamaged windows out of precaution.

PHOENIX — Hundreds rallied in downtown Phoenix to demonstrate against the death of George Floyd in Minneapolis police custody in a protest that turned into a clash with police.

Protesters who marched from Phoenix City Hall to the state Capitol on Thursday night into Friday morning carried signs reading, “Silence is violence” and “Being black should not be a death sentence,” The Arizona Republic reported.

The newspaper reported that rocks and water bottles were thrown at police. Video from local TV stations shows protesters hammering on the window of a police car, and the newspaper reported at least one police car window was broken. The Arizona Department of Public Safety and Phoenix police responded by firing pepper spray and rubber bullets at the crowd.

PETAL, Mississippi — A Mississippi mayor who sparked outrage when he said he “didn’t see anything unreasonable” about the death of George Floyd in Minneapolis police custody is resisting calls to resign, including from his own town’s board of aldermen.

“Why in the world would anyone choose to become a police officer in our society today?” Petal Mayor Hal Marx tweeted Tuesday, the day four Minneapolis police officers were fired. The 46-year-old Floyd, a black man, was handcuffed and pleading for air as a white police officer kneeled on his neck Monday.

In a follow-up tweet, the Republican directly referenced the Floyd case, saying he “didn’t see anything unreasonable”: “If you can say you can’t breathe, you’re breathing. Most likely that man died of overdose or heart attack. Video doesn’t show his resistance that got him in that position. Police being crucified.”

LOUISVILLE, Ky. — Looking to defuse tensions in Louisville over the fatal shooting of a black woman by police who broke down her door, the victim’s mother on Friday called on protesters to continue demanding justice but to do it in “the right way without hurting each other.”

“No officers discharged their service weapons,” and all seven shot were civilians, police spokesman Sgt. Lamont Washington wrote in an email to The Associated Press.

In her statement, Tamika Palmer said her daughter — an emergency medical technician — devoted her life to others, and the “last thing she’d want right now is any more violence.”

Thursday night’s demonstration came as protesters across the country, in cities including Los Angeles, Denver, New York and Memphis, turned out in alliance with demonstrators in Minneapolis, where George Floyd became the latest black man to die in police custody.

DENVER — Protesters swarmed Denver on Thursday, blocking traffic and smashing vehicles while running from gunfire and police tear gas after a demonstration against the death of a black man in Minneapolis police custody turned violent.

Hundreds of demonstrators stood in the downtown streets and chanted as darkness fell outside the Colorado State Capitol, where protesters spray-painted graffiti and broke car windows. In other areas of downtown Denver, police in riot gear fired gas canisters, used rubber bullets and walked in a phalanx through the streets to drive protesters away. The protest briefly spilled over onto Interstate 25, blocking all lanes of traffic until police used tear gas to disperse the crowd.

The protests continued into the night, despite Denver Mayor Michael Hancock pleading for calm.

“I certainly understand everyone’s frustration and sense of pain and disgust following the murder of George Floyd in Minneapolis,” he said in a video posted on Twitter. “But I want to plead to everyone. Let’s demonstrate, but let’s demonstrate peacefully. Leave the weapons home.”

NEW YORK — Protesters angry about the death of a black Minnesota man in police custody defied New York’s prohibition on public gatherings Thursday and staged a chaotic rally in Manhattan, where they faced off with officers enforcing social distancing rules.

Scores of demonstrators, some wearing masks and some not, massed in Union Square and marched through the streets chanting “I can’t breathe” and waving signs with slogans including “Police brutality and murder must stop.”

Police officers, also wearing masks to protect against the virus, lined up opposite the demonstration. Video posted on social media showed occasional skirmishes as officers pushed the crowd back.

The New York Police Department said more than 30 people had been taken into custody. Video showed at least one demonstrator being clubbed and others being wrestled to the ground as some protesters shoved officers and screamed insults. The police department said one officer was struck with a garbage can and another punched.