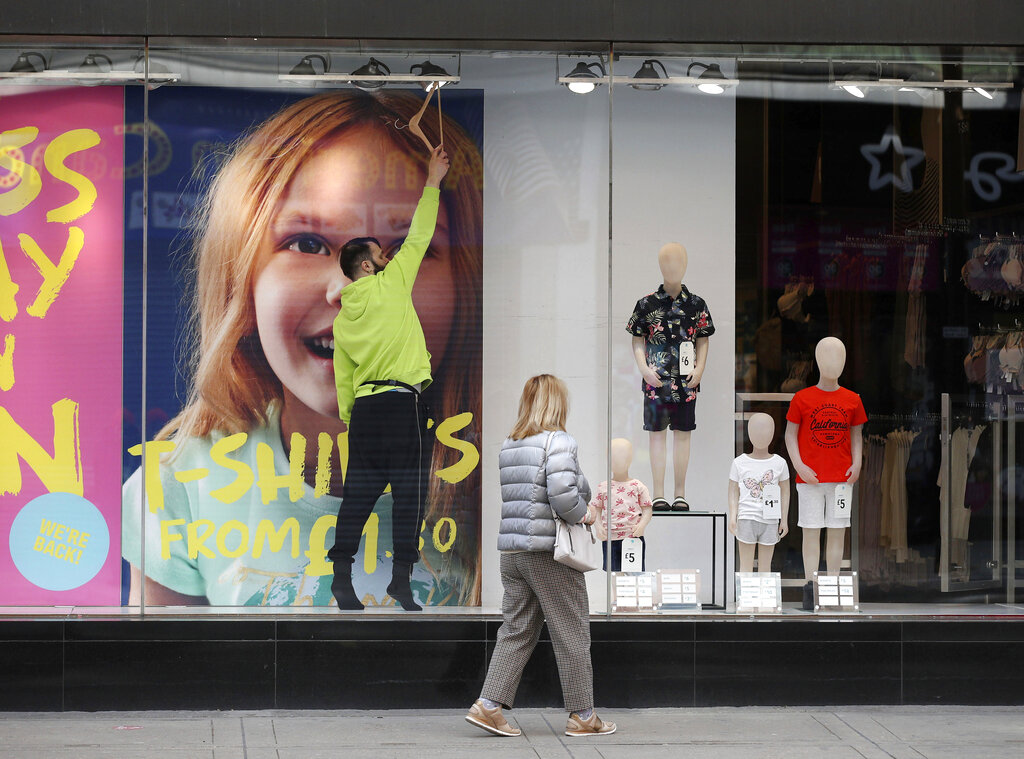 Final touches are made to a window display in a Primark store on Oxford Street, central London, Sunday April 11, 2021. (Photo: AP)

Millions of people in Britain will get their first chance in months for haircuts, casual shopping and restaurant meals on Monday, as the government takes the next step on its lockdown-lifting road map.

Nationwide restrictions have been in place in England since early January, and similar rules in the other parts of the U.K., to suppress a surge in coronavirus infections that swept the country late last year, linked to a more transmissible new variant first identified in southeast England.

Britain has had Europe’s worst coronavirus outbreak, with more than 127,000 confirmed deaths.

Infections, hospitalizations and deaths have all fallen thanks to the lockdown, and a mass vaccination program that has given at least one dose to more than 60% of the adult population.

But Prime Minister Boris Johnson and epidemiologists have urged caution, saying that many people remain unvaccinated and relaxing social distancing rules or allowing foreign holidays this summer could bring a new spike in infections.

“The situation in the U.K. is becoming clear and is stabilizing, but people have to remember that’s not the case elsewhere,” said Peter Horby, who chairs the government’s New and Emerging Respiratory Threats Advisory Group. “The pandemic is still raging globally.

“And many countries in Europe even are still seeing racing case numbers or having to reintroduce lockdowns. So it’s very hard to predict what will happen in the next couple of months,” he told Times Radio.

On Monday, nonessential shops will be allowed to reopen, along with hair salons, gyms and outdoor service at pubs and restaurants.

The prime minister had promised to visit a pub for a pint to mark the occasion, but postponed the celebratory drink after the death of Prince Philip, husband of Queen Elizabeth II, on Friday.

Indoor drinking and dining won’t be allowed until May 17 at the earliest, and theaters, cinemas, nightclubs and most other venues remain closed, while indoor socializing is tightly restricted and foreign holidays remain banned.

The easing is good news for retail and hospitality businesses, which have endured several stretches of lockdown over the past year. But it’s a long way from business as usual; the British Beer and Pub Association estimates that just 40% of pubs in England have the space to reopen for outdoor service.

The rules apply in England. The other parts of the United Kingdom — Scotland, Wales and Northern Ireland — are following their own, broadly similar plans.