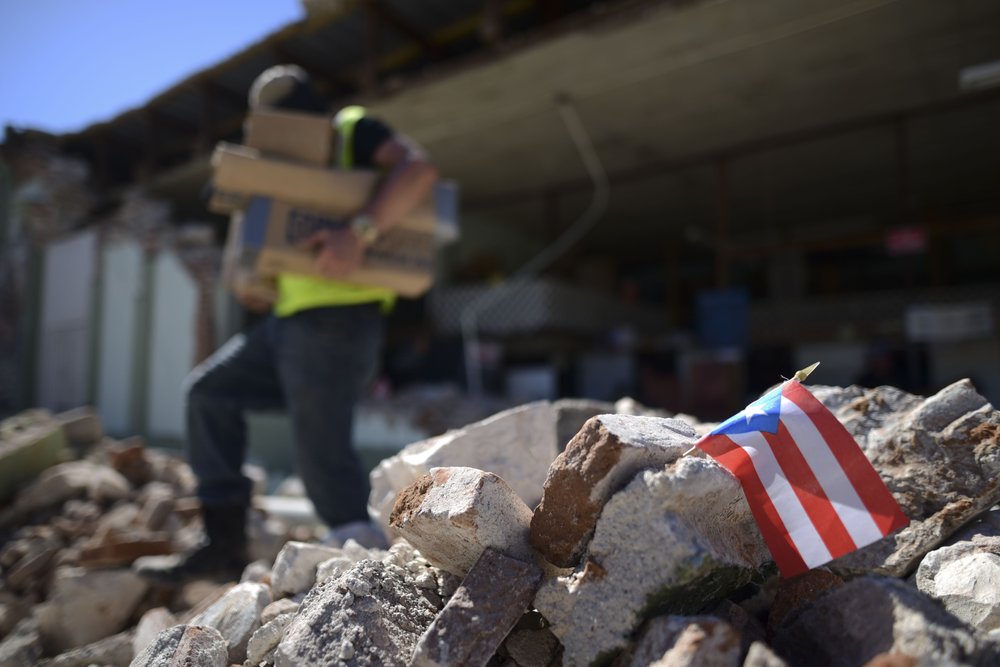 A Puerto Rican flag hangs within the rubble after it was placed there where store owners and family help remove supplies from Ely Mer Mar hardware store, which partially collapsed after an earthquake struck Guanica, Puerto Rico, Tuesday, Jan. 7, 2020. (Photo: AP)

Cars, cots, and plastic chairs became temporary beds for hundreds of families who lost their homes in southwest Puerto Rico as a flurry of earthquakes struck the island, one of them the strongest in a century.

The magnitude 6.4 quake that struck before dawn on Tuesday killed one person, injured nine others and knocked out power across the US territory. More than 250,000 Puerto Ricans remained without water on Wednesday and another half a million without power, which also affected telecommunications.

In addition, more than 1,000 people were staying in government shelters in the island’s southwest region as US President Donald Trump declared an emergency and Puerto Rico Gov. Wanda Vázquez activated the National Guard.

The hardest hit municipality was the southwest coastal town of Guánica. More than 200 people had taken shelter in a gymnasium after a quake on Monday, only for the latest shake to damage that structure — forcing them to sleep outside.

Among them was 80-year-old Lupita Martínez, who sat in the dusty parking lot with her 96-year-old husband by her side. He was sleeping in a makeshift bed, a dark blue coat covering him.

“There’s no power. There’s no water. There is nothing. This is horrible,” Martínez said.

The couple was alone, lamenting that their caretaker had disappeared and was not answering their calls. Like many Puerto Ricans affected by the quake, they had children in the US mainland who urged them to move there, at least until the earth stops shaking.

While officials said it was too early to estimate the total damage caused by the string of quakes that began the night of Dec. 28, they said hundreds of homes and businesses in the southwest region were damaged or destroyed. Just in Guánica, a town of roughly 15,000 people, nearly 150 homes were affected by the quake, along with three schools, including one three-story structure whose first two floors were completely flattened.

In Guánica itself, “We are confronting a crisis worse than Hurricane Maria,” said Mayor Santos Seda, referring to the 2017 storm that devastated the island. “I am asking for empathy from the federal government.”

He said officials believe the homes of 700 families in his municipality are close to collapsing.

Tuesday’s quake was the strongest to hit Puerto Rico since October 1918, when a magnitude 7.3 quake struck near the island’s northwest coast, unleashing a tsunami and killing 116 people.

More than 950 quakes and aftershocks have been recorded in the area of Tuesday night’s event since Dec. 31, though most were too weak to be felt, according to US Geologic Survey.

The USGS said that while it’s virtually certain there will be many aftershocks in the next week, the chance of a magnitude 6 quake -- similar to Tuesday’s -- or stronger is around 22 percent.

In Guánica, some people dragged mattresses outside their homes or set up small tents.

Authorities were trying to figure out where to shelter them all as they handed out blankets, food, and water to families gathered at the gymnasium for the second night in a row. Many had their belongings in large garbage bags as they sat haphazardly on unstable plastic chairs. Some slept. Others cradled their dogs and many simply stared listlessly into the distance. One elderly man spent an entire day in his wheelchair, refusing to lay down on a cot.

Meanwhile, a handful of people slept in their cars, in chairs or on the ground as cots ran out.

“Now I’m afraid of the house,” said 49-year-old Lourdes Guilbe as she wiped away tears and confided that she felt overwhelmed caring for the nearly dozen relatives gathered around her, including her more than 90-year-old grandfather, who sat in a wheelchair wearing green pajamas and socks.

Guilbe said her home is cracked and her daughter’s home collapsed, so they weren’t sure where they would live in upcoming days.

Psychologists met with Guilbe and dozens of other people affected by the earthquakes, going door-to-door on Monday in affected neighborhoods and then visiting people in shelters on Tuesday. Among them was Dayleen Ortiz, who set up a speaker on the roof of her car to blast uplifting salsa music and provided crayons and paper to children and urged adults to shake their fears.

“There is a lot of uncertainty,” she said. “We don’t know if this is going to continue.”

One young girl tapped Ortiz on her leg repeatedly: “I want to play beautician,” she said.

Ortiz dug behind cases of water bottles, chairs, and blankets in her car and produced eight small new nail polishes and the girl smiled wide. It’s a trick the psychologist learned to entertain children after Hurricane Maria hit, causing an estimated 2,975 deaths and more than $100 billion in estimated damage.

Reconstruction has been slow, and the earthquake was the newest blow to an island where thousands of people have been living under a blue tarp since the hurricane and the power grid remains fragile.

“I can’t stand this,” said 64-year-old Zenaida Rodríguez as she sat under a tree and the ground again rumbled. “Did you feel that?”