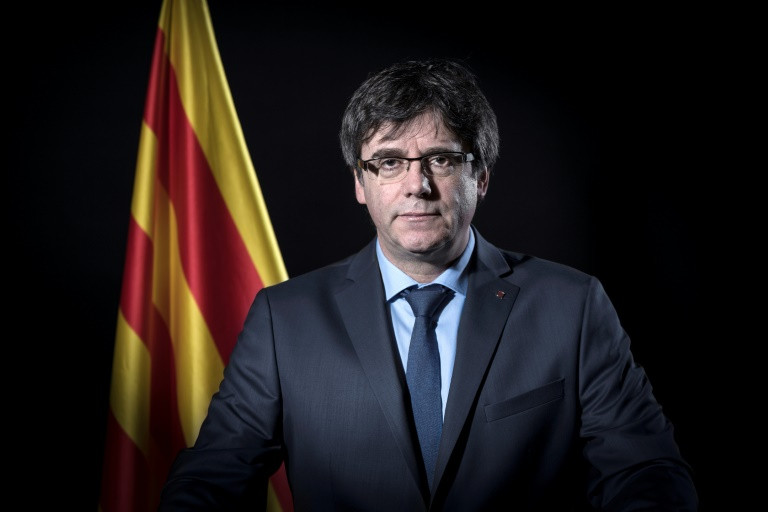 Former Catalan president Carles Puigdemont is to appear in court Monday following his arrest in Germany which triggered a wave of protests in Catalonia where thousands of separatists faced off with police.

Puigdemont spent the night in a German jail cell following his arrest Sunday, after he crossed the border from Denmark, under a European warrant issued by Spain.

The arrest comes five months after Puigdemont went on the run as Spanish prosecutors sought to charge him with sedition and rebellion in the wake of a vote by the Catalan parliament to declare independence.

It marks the latest chapter in a secession saga that has bitterly divided Catalans and triggered Spain's worst political crisis in decades.

According to Puigdemont's lawyer Jaume Alonso-Cuevillas, he was on his way back to Belgium, where he fled after Spanish authorities moved to impose direct rule over Catalonia.

The ousted Catalan leader, 55, will be brought before a German court Monday to confirm his identity. It will later decide if he is to remain in custody pending extradition proceedings.

A decision on extradition must normally be made within 60 days under German law. A spokeswoman for the prosecutor's office for Schleswig-Holstein state told AFP it would "probably not come this week" ahead of the four-day Easter holiday.

Calling the situation "very delicate", Alonso-Cuevillas told Catalonia's Rac1 radio it was "very likely that he will not be allowed to leave Germany" while awaiting a decision on his extradition

Clashes erupted as protesters took to the streets in Catalonia on Sunday following Puigdemont's arrest.

Catalan police decked out in riot gear shoved and hit demonstrators with batons to keep the crowd from advancing on the office of the Spanish government's representative in Barcelona, the capital of the wealthy northeastern region.

Officers fired warning shots in the air to try to contain the demonstrators, who pushed large recycling containers towards police. Some people threw glass bottles, cans and eggs at police.

About 90 people were slightly injured during the protests in Barcelona, including 22 police officers, emergency services said.

The case lands an unwanted diplomatic hot potato in German Chancellor Angela Merkel's lap less than two weeks after her new government was sworn in.

"Spain is a democratic state based on the rule of law. The German government is convinced that a solution to the Catalonia conflict has to be found within Spain's legal and constitutional order," he said.

"We are all equal before the law and no one can make a mockery of the courts forever," she said.

However protesters in Barcelona saw the move as a provocation.

"It angers us that they arrested Puigdemont, he is our highest representative," 22-year-old architecture student Judit Carapena told AFP.

"I have no doubt that Catalan society will act as it always has, with non-violence," he said.

Aside from Puigdemont, nine other Catalan separatist leaders are in jail in Spain over the region's failed bid for independence.

The court said they would be prosecuted for "rebellion", a charge which carries a maximum sentence of 30 years in prison.

Issuing the warrant for Puigdemont on Friday, Judge Pablo Llarena accused the ousted Catalan leader of organising an independence referendum in October last year despite a ban from Madrid.

That vote had been swiftly followed by the Catalan parliament's declaration of independence on October 27.

Puigdemont had been visiting Finland since Thursday, but slipped out of the country before Finnish police could detain him.

Elsa Artadi, a lawmaker with Puigdemont's Together for Catalonia party, said he should fight his extradition.

"Spain does not guarantee a fair trial; only revenge and repression," she wrote on Twitter.

While separatist parties won Catalonia's regional elections in December, called by Madrid, they have been unable to elect a president and form a government as they have picked candidates who are now either in exile, in jail or facing prosecution.

After Puigdemont was forced to withdraw his bid for the presidency as he could not return to Spain without facing arrest, another pro-independence leader Jordi Sanchez followed suit when a judge refused to let him out of jail to be sworn in. The third candidate, Turull, was placed in custody on Friday.

Fresh regional elections will be triggered if a new leader is not elected by May 22.