Russian President Vladimir Putin on Saturday hosted his Palestinian counterpart Mahmoud Abbas and the two sides discussed bilateral relations and the situation in the Middle East, the Kremlin said. 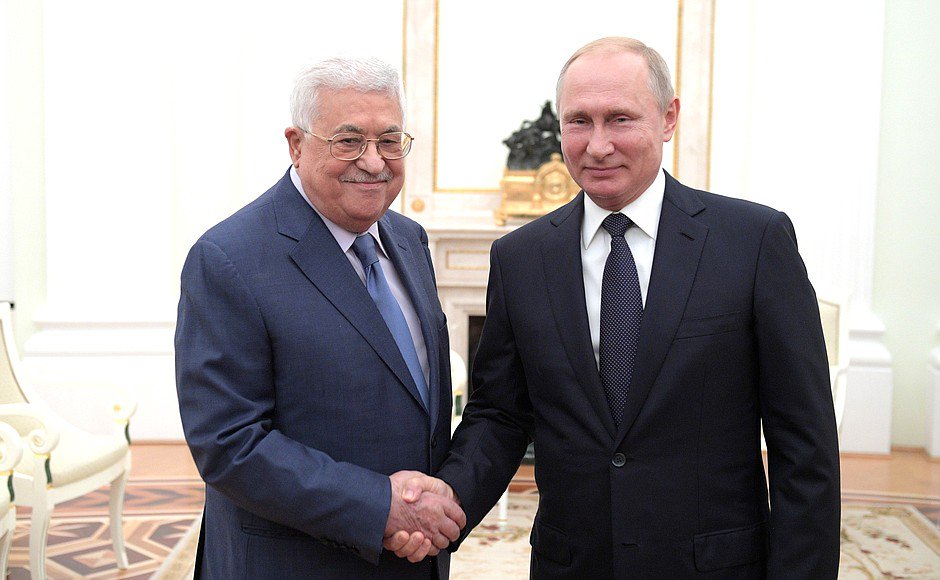 "We are happy to have this opportunity to hold consultations with you both on bilateral relations and on the situation around Palestine, near Palestine, on regional matters," Putin said prior to the meeting, according to a Kremlin transcript.
Putin noted the situation in the Middle East is complicated and said he would gladly inform Abbas of his contacts with leaders of other countries in the region.
Calling Russia-Palestine relations "truly special," Abbas praised the constant development of bilateral cooperation of the two countries and their regular discussions on regional issues, which provides useful advice for the Palestinian side.
Abbas said that Palestine and the region on the whole are going through a difficult time, noting in particular the latest disputes over Israel's settlement activity.
On May 24, the Israeli High Court reached a verdict to raze the Bedouin village of Khan al-Ahmar in East Jerusalem, where 200 homes and community structures are slated for demolition.
"Israel's settlement activity is a problem representing the biggest importance for us, as this is very dangerous. We try to use all possible means to oppose their actions," he said.
The Palestinian president also voiced his concern over the US decision to relocate its embassy to the holy city.
"We oppose the attempts of the Americans to impose their resolution of the most pressing Palestinian problems. This has resulted in the break of our contacts," Abbas said.
Ties between Palestine and the United States have deteriorated since the latter declared Jerusalem the capital of Israel in December. Things have further worsened after the US embassy in Israel was moved from Tel Aviv to Jerusalem in May.
On Wednesday, Putin held talks with Israeli Prime Minister Benjamin Netanyahu mainly on the situation in Syria, according to the Kremlin.