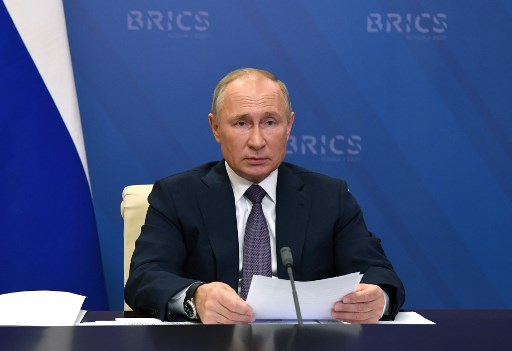 "The task of developing collective BRICS steps to combat infections, increase interactions between anti-epidemic departments, and protect the life and health of our citizens came to the fore," Putin said during the 12th BRICS summit hosted by Russia via video conference.

He said that it is important to boost the BRICS Vaccine Research and Development Center, which was agreed upon two years ago at the Johannesburg summit.

He praised the direct contribution of the BRICS countries toward a comprehensive package of G20 measures aimed at overcoming the negative consequences of the pandemic.

"The focus is on rebuilding global value chains and the openness of international trade," Putin said.

Despite the ongoing coronavirus pandemic, cooperation among the BRICS states has been "actively developing" in the political, economic and humanitarian spheres, the Russian leader noted.

The five countries are increasing cooperation in science, technology and innovation, while intensive contacts have been established between their academic and scientific centers, according to Putin.