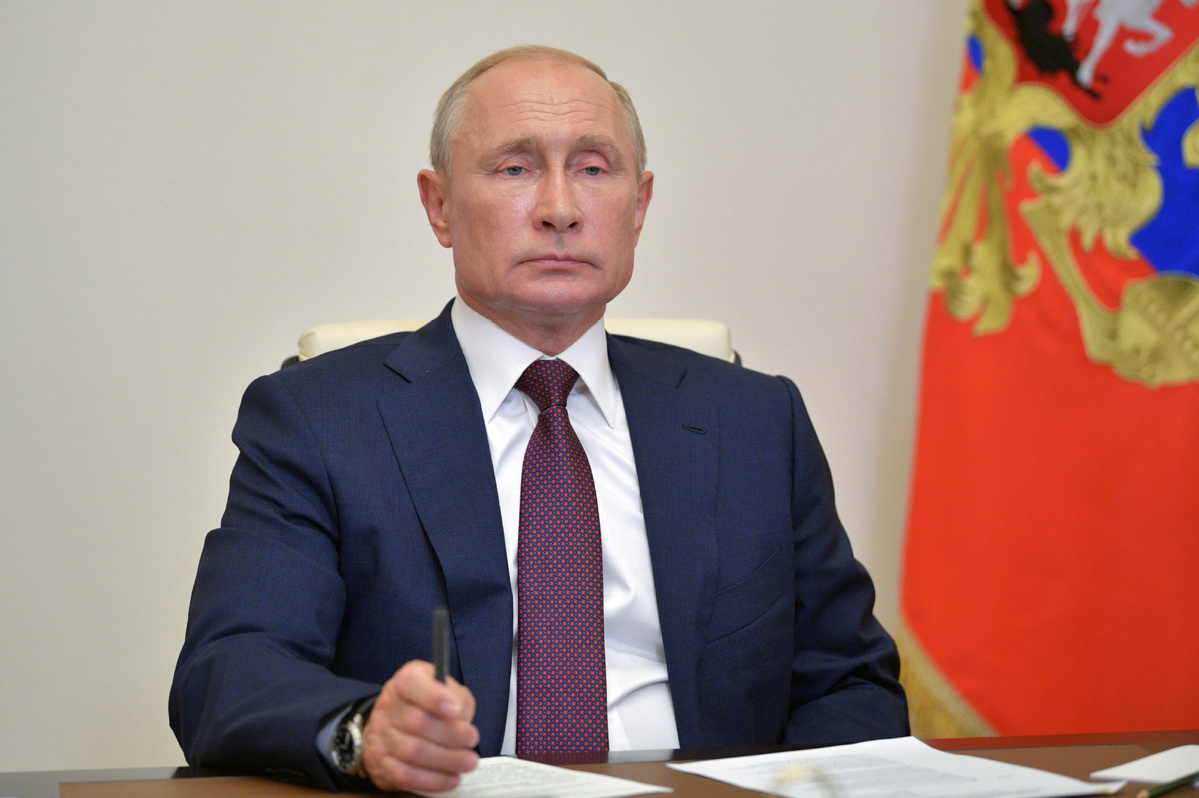 Russian President Vladimir Putin takes part in a video conference call with members of the working group on amendments to the Russian constitution at the Novo-Ogaryovo residence, outside Moscow, Russia, July 3, 2020. (Photo: Agencies)

Russian President Vladimir Putin said on Sunday that constitutional amendments approved in a nationwide vote created the conditions for Russia's "progressive development" for decades to come.

The constitutional changes were approved by 77.92 percent of those casting votes in the weeklong ballot that ended on July 1. The referendum, which was originally scheduled for April 22, had been postponed due to the coronavirus pandemic.

The Kremlin has hailed the overwhelming vote in favor of the amendments as a triumph for Putin, who said on Friday that Russian society had shown unity by voting to back the reforms.

The package of amendments officially took effect on Saturday.

"I am absolutely convinced that we are doing the right thing, that we are adopting amendments to the current Constitution," Putin said in an interview with Russia's Rossiya 1 TV channel.

In his first appearance on Russian TV after the vote, Putin said the amendments will strengthen Russian nationhood and create the conditions for the progressive development of the country over the coming decades.

Putin also referred to the amendments that concern the inviolability of the country's borders, adding that these changes were proposed by members of the working group on the constitutional amendments and citizens themselves.

Commenting on constitutions of the Soviet Union to which Russia had belonged, Putin said the Soviet constitution included a clause that the republics should be given the right to pull out from the USSR.

"This was a time bomb laid back in 1922 when the Soviet Union was established," said Putin, adding that the right was also included in the later Soviet constitutions of 1924, 1936 and 1977.

"Of course, we should avoid these things," said Putin, stressing the importance of the constitutional amendments in defending Russia's sovereignty and territorial integrity.

Putin recalled that the procedures governing the withdrawal of any republic from the Soviet Union were not regulated. "The question arises: what to do if a republic joined the Soviet Union, but amassed into its baggage a huge number of Russian lands, traditional Russian historic territories and then suddenly decided to leave the union," he said.

"Then, it should leave like when it came rather than drag away 'gifts' from the Russian people. Nothing of this was written down."

Although international attention on the vote mainly focused on the amendment that reset the current presidential terms, enabling the incumbent to run for a further two terms, a total of 206 amendments were included in the reforms that cover political and social spheres.