WORLD Putin does not name US places as Russian missile targets: Kremlin

Putin does not name US places as Russian missile targets: Kremlin 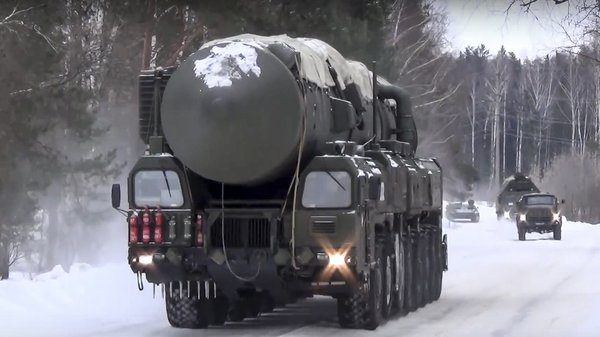 In this photo made from the footage taken from Russian Defense Ministry official web site on Monday, Jan. 15, 2018, A Russian truck-mounted intercontinental ballistic missile takes part in military drills in Russia. The Russian Defense Ministry said the drills are held across a vast area from the Ivanovo region just northeast of Moscow to the Irkutsk region in eastern Siberia. (Photo: AP)

MOSCOW, Feb. 25 (Xinhua) -- Russian President Vladimir Putin did not name any US locations as the possible targets of Russian missiles when the country is threatened, Kremlin spokesman Dmitry Peskov said Monday.

He made the remarks after Rossiya-1 TV channel said Sunday that Russia may aim its missiles at US military decision-making centers, including the Pentagon and Camp David.

Putin said Russia would retaliate if US missiles pose a threat, but he did not mention a single geographic position as a possible target in his annual address to the Federal Assembly last week, Peskov told reporters.

The spokesman added that the Kremlin does not interfere in the editorial policy of Russian media outlets, even state-run ones.

Putin said in his speech that if the United States places intermediate-range missiles in Europe, Russia will deploy weapons "that can attack not only the areas where direct threats come from but also the areas which contain decision-making centers."