Putin, Erdogan pledge to continue military cooperation amid US sanctions

Russian President Vladimir Putin and his Turkish counterpart Recep Tayyip Erdogan vowed to continue their joint efforts in the war against terrorists in Syria on Wednesday, while a US Senate committee approved legislation to impose sanctions on Turkey. 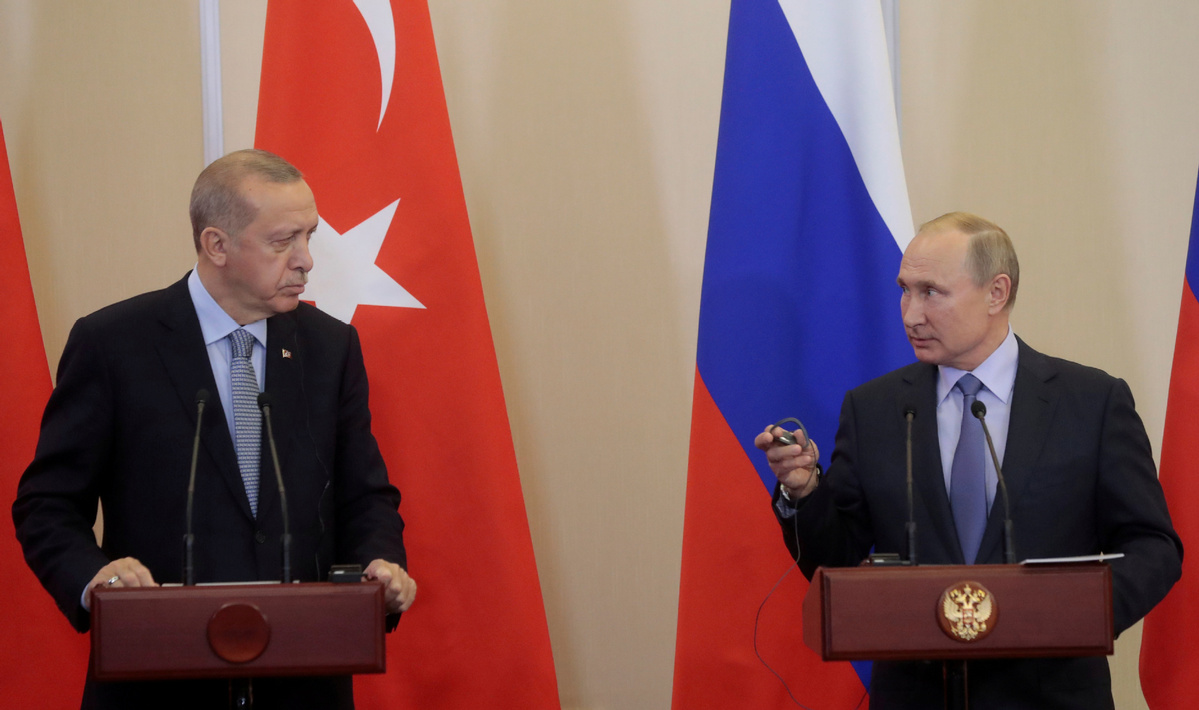 The Kremlin said Putin held telephone talks with Erdogan at the request of the Turkish side.

"Special attention was paid to the situation in Syria. The leaders called for intensified joint efforts against the terrorist threat, including in Idlib province and in the country's northeast. And they underscored the need to implement in full the Russian-Turkish agreements on cooperation in those areas," the Kremlin said in a statement.

Meanwhile, Russia, Turkey and Iran on Wednesday adopted a joint statement on Syria at the 14th round of the Astana talks held in Nur-Sultan, Kazakhstan.

The three countries expressed concerns over the increasing terrorist activities in Idlib, and said they would continue cooperation in eliminating terrorist groups in Syria, including the Islamic State, the al-Nusra Front, and other groups designated as terrorists by the United Nations.

Despite facing strong opposition from the United States, Turkey has enhanced its ties with Russia, especially in the field of military cooperation in Syria and the arms trade.

In late October, Turkey's Daily Sabah newspaper reported that Ankara and Moscow were close to striking a deal on the delivery of 36 Su-35 fighter jets.

Li Yonghui, a researcher of Russian studies at the Chinese Academy of Social Sciences, said Russia and Turkey had common interests in the Middle East, which is why Turkey would purchase military equipment from Russia, regardless of opposition from NATO and the US.

In a related development, the US Congress approved its military budget for 2020 on Tuesday, with both Democrats and Republicans stating that Turkey's purchase of Russian S-400 missile defense systems could entail sanctions under the Countering Russian Influence in Europe and Eurasia Act. And the US lawmakers gave the defense secretary discretion to spend up to $30 million to put F-35 jets, which Turkey had ordered, in storage until a plan for their use was formalized.

The Turkish A Haber TV channel reported earlier on Wednesday that Turkish Foreign Minister Mevlut Cavusoglu responded to the US jet storage plan by saying that the country could obtain Russia's alterative to the F-35 if the US refused to supply the jets.

Cavusoglu also threatened to close its Incirlik Air Base to the US if Washington imposed sanctions on Turkey. He said that Ankara could also "change the status of the Kurecik base", at which elements of the European air-defense system are deployed.

According to a Reuters report, a US senate committee approved the Turkey sanctions bill on Wednesday.

Commenting on the bill, Li said: "The best (thing) for the US to do is to turn a blind eye to Russia and Turkey's partnership."

This is because the sanctions that will be imposed on Turkey by the US are unlikely to stop cooperation between Russia and Turkey. Moreover, in ensuring regional stability and countering terrorism in the Middle East, the US would still expect Turkey to play an important role, she added.