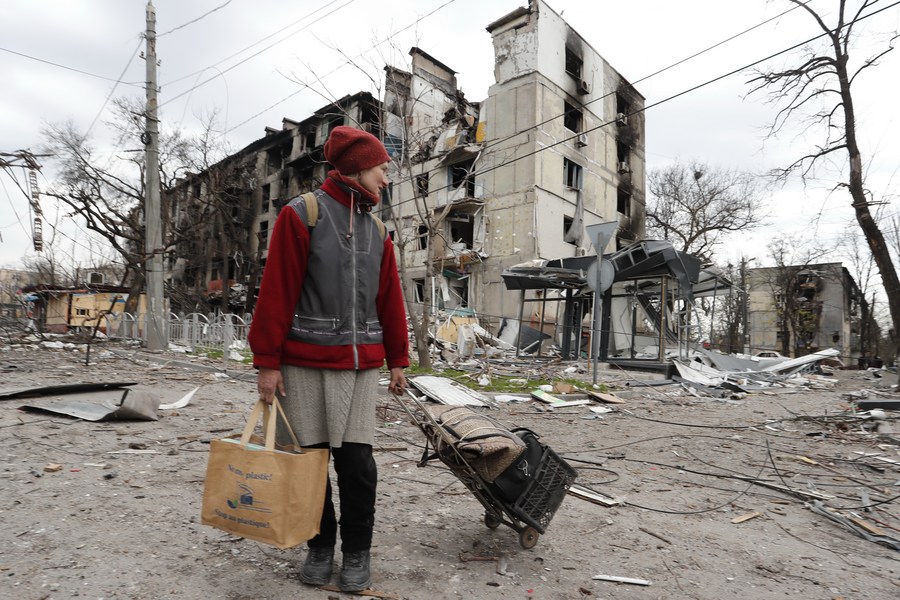 A resident walks near damaged buildings in Mariupol on April 18, 2022. (Photo: Xinhua)

MOSCOW - Russian President Vladimir Putin and European Council President Charles Michel discussed the situation in Ukraine during a phone conversation on Friday, the Kremlin said in a statement.

Michel informed Putin of his contacts with the Ukrainian leadership during a recent trip to Kyiv, and Putin outlined his assessment of the Russian special military operation in Ukraine.

Responding to a call of Michel to have direct contact with Ukrainian President Volodymyr Zelensky, Putin reiterated that such a possibility depends on concrete results in the ongoing peace talks, during which "the Ukrainian side is showing inconsistency and is not ready to seek mutually acceptable solutions."

Russia has canceled an assault on the industrial zone of the Azovstal plant in Ukraine's Mariupol and offered all the resistant forces there an opportunity to lay down arms and "receive decent treatment", Putin said.

He explained Russia's measures to protect civilians, including the opening of humanitarian corridors.

Michel "strongly urged for immediate humanitarian access and safe passage from Mariupol and other besieged cities all the more on the occasion of Orthodox Easter," he said on Twitter.

He also reiterated the position of the European Union (EU), which supports Ukraine and its sovereignty, and condemns sanctions for Russia's operation, he tweeted.

Putin criticized the "irresponsible statements" of EU officials about the need to settle the Ukraine issue via military means and their ignoring "numerous war crimes" by the Ukrainian forces, according to the statement.

He also denounced most EU countries' Russophobic policy in the cultural, humanitarian and sports fields.