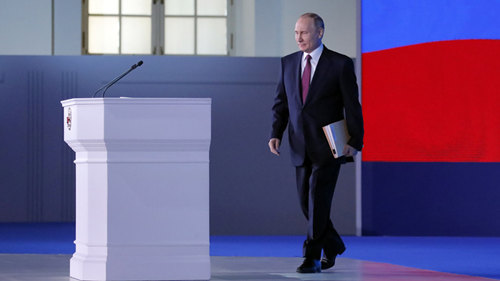 In his annual address to the Federal Assembly, Putin said Russia’s record of cooperation with countries like China shows its willingness to have constructive and beneficial relations, according to Russia Today.

Putin stressed that the comprehensive strategic partnership with China is one of the key factors to maintaining global and regional stability under the current trying conditions. The relationship is founded on the basis of benefits for all countries and is a good model for relationships around the world.

China is on track to become the world’s biggest economy and cooperation between Russia and China has expanded year after year. It is very important that new cooperation projects are carried out in trade, investment, energy, high technology, and other areas, added Putin.

According to the constitution of Russia, the president should give to the Federal Assembly an annual state of the nation address, which is normally held by the end of December.

The three-month delay of this state of the nation address is due to the 2018 presidency election. The address is also seen as Putin’s outline for the upcoming presidential campaign.