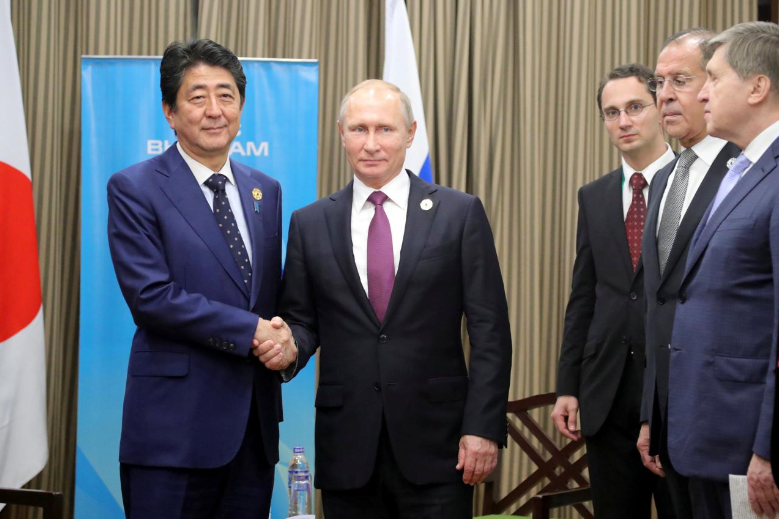 Concluding a peace treaty between Russia and Japan would involve Moscow examining how it could be affected by Tokyo’s security commitments to its allies, Russian President Vladimir Putin said on Saturday.

Russia and Japan never formally ended their hostilities after World War Two because of a dispute over a chain of islands in the Pacific.

Putin was speaking at the end of an Asia-Pacific Economic Cooperation Summit in Vietnam at which he said he discussed talks on the treaty with Japan’s Prime Minister Shinzo Abe.

Japan has a long-standing defense alliance with the United States, a stance that sits uncomfortably with Moscow, which has often accused Washington of projecting its military might close to Russia’s borders.

“I want to say that here there are lots of questions regarding the peace treaty,” Putin told reporters.

“Its not a secret that we also need to look at what commitments Japan has towards its partners in the areas of defense and security, and how that will influence the progress of the negotiating process on the peace treaty between Russia and Japan.”

Putin said Moscow needed to examine “what commitments Japan has and what she can do, and cannot do, independently. It’s entirely natural, if there are some commitments, that they obviously have to be observed, and how does that impact our relations with Japan?”

“We all have to understand that it’s a lot of work, and maybe it is indeed not a question of just one year,” the Russian leader said at a news conference in the Vietnamese city of Danang, where the APEC summit was held.

The disputed islands are known in Russia as the Kurile islands and in Japan as the Northern Territories. Soviet forces occupied four islands at the southern end of the chain at the end of World War Two.

Putin said that there were some aspects of the dispute which could already be addressed, including easing visa restrictions for Japanese citizens to visit the disputed islands, and establishing economic cooperation there.

“That it to say, there are certain things that can be done right away, some things probably will take a long time,” Putin said. “It does not depend on who is in office; Abe, Putin, or someone else,” Putin said.

“It’s important that our countries, our peoples are resolved on a long-term resolution of all the problems to create a favorable environment for our relations to develop.”