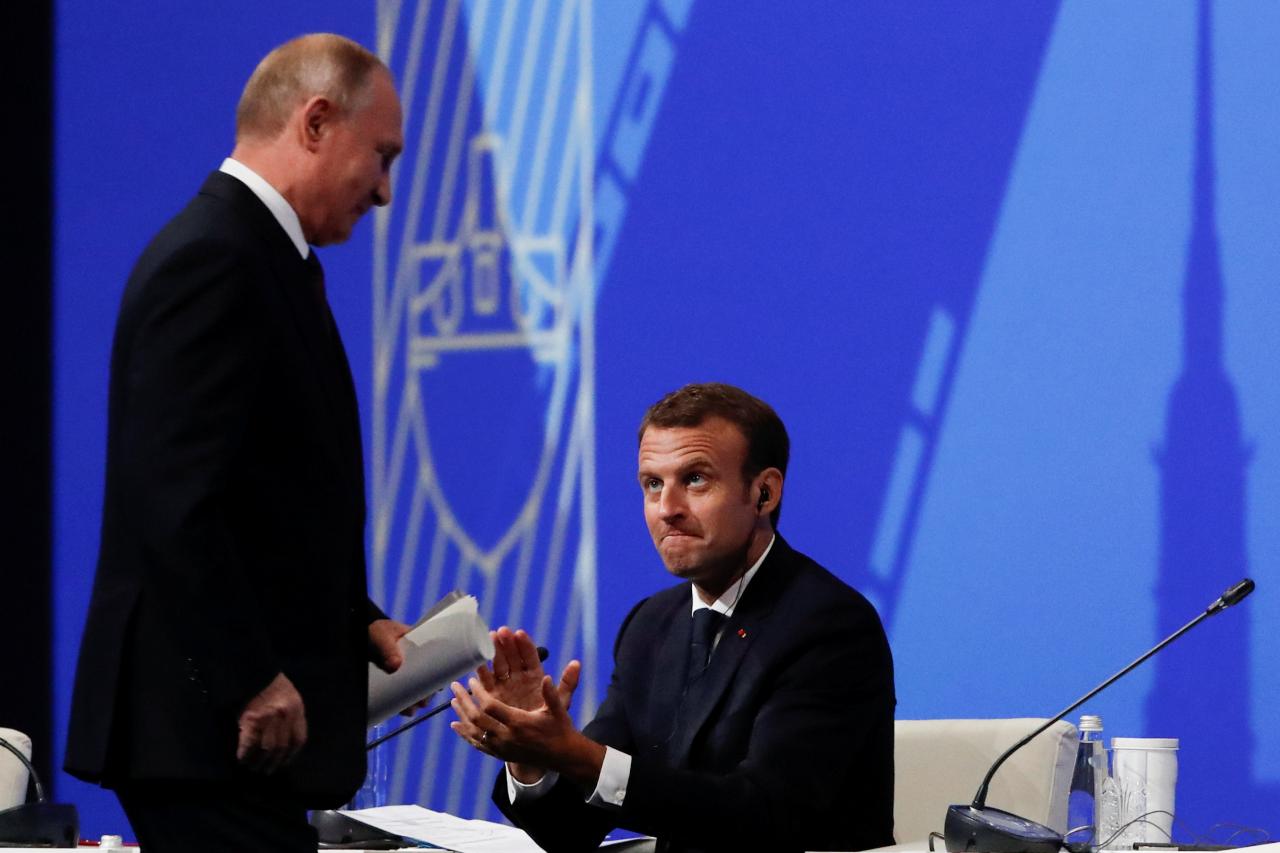 Russian President Vladimir Putin and his French counterpart Emmanuel Macron on Friday found a common cause in their shared unease at US President Donald Trump’s actions on Iran, climate change and international trade.

France is at odds with the Kremlin over its annexation of Crimea from Ukraine four years ago, and allegations that Moscow meddled in a French presidential election in support of one of Macron’s opponents.

But there were only fleeting signs of those differences when Macron met Putin at the St Petersburg International Economic Forum, an annual showcase for investment in Russia that the Russian leader hosts in his home town.

Instead, the two leaders focused on concerns about the future of a multinational deal on Iran’s nuclear deal program, now in jeopardy after Trump pulled the United States out of it.

Washington’s withdrawal from the pact raises the prospect that Russian or French companies doing business with Iran could be hit with unilateral US sanctions.

Speaking at a question-and-answer session in front of an audience of business executives and Russian officials, Putin said the US withdrawal was damaging and counter-productive.

He also railed against the United States applying its laws beyond its borders to punish foreign companies. “This is unacceptable and it has to end,” he said.

Macron, who had traveled to Washington in an unsuccessful bid to persuade Trump to keep faith with the Iran deal, did not explicitly criticize the US leader.

He said he had a strong relationship with Trump, but he acknowledged there are “issues on which we have differences”.

He said he would try to convince Trump to return to talks about Iran’s nuclear program, and was also critical of Trump’s decision to move the US embassy in Israel to Jerusalem, out of step with the stance of most European governments.

“That was not desirable,” Macron said, adding that the embassy move played a part in sparking fatal clashes between Palestinian protesters and Israeli security forces.

During the session, Macron sat alongside Putin, referred to him as “Dear Vladimir”, and the two men nodded in agreement with each other about a range of issues.

Macron said that Trump had, de facto, lost an international argument over the Paris climate change agreement because the international consensus in support of the accord had held, even though Trump had decided to exit the deal.

Trump’s administration last month imposed sanctions on a raft of major Russian companies. The step also hurt European and other international firms who had to cut off business ties with the sanctioned entities for fear of punitive action by Washington.

As he sat alongside Putin, Macron referred repeatedly to the need to establish “European financial sovereignty” - a jab at European economies’ reliance on the US financial system.

He also arrived in St Petersburg with a large delegation of French business executives keen to sign deals with Russia, despite the new US sanctions.

Putin accused the United States of undermining global trade rules by using sanctions as a weapon in its drive towards protectionism.

The Russian leader pointed to the presence of large numbers of foreign executives at the event as evidence that the US sanctions were failing to achieve their aim.