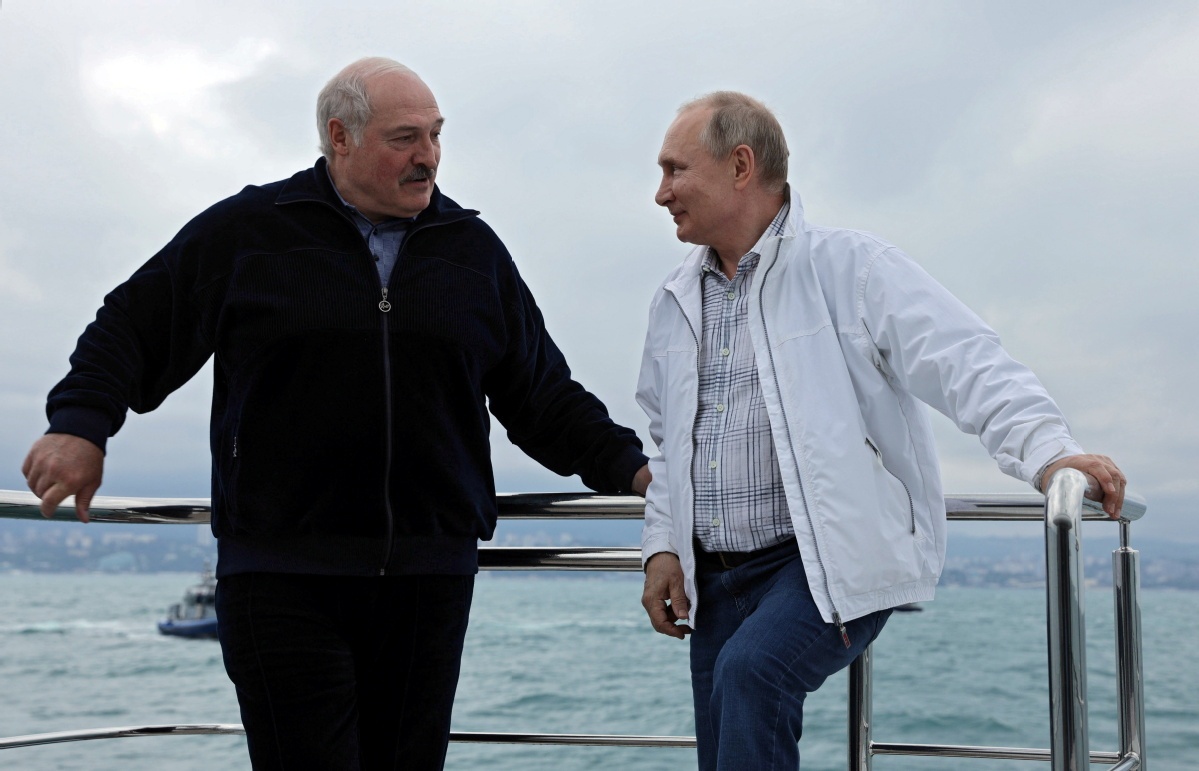 Russia's President Vladimir Putin took his Belarusian counterpart Alexander Lukashenko for a boat trip on Saturday as the close allies met for a second day, and offered his support in his standoff with the West over the Ryanair grounding.

Lukashenko paid a visit to the Black sea resort of Sochi in southern Russia following accusations that flew in the West after Belarusian air traffic control informed Ryanair flight FR4978 from Athens to Vilnius on May 23 of a hoax bomb threat.

Minsk scrambled a MiG-29 fighter jet to escort the aircraft down, and then arrested opposition figure Roman Protasevich and his girlfriend.

"Yesterday was the day of official talks, and today it's informal," Kremlin spokesman Dmitry Peskov said of the meetings in Sochi.

"There were mainly two major topics, namely the further development of trade and economic cooperation of Russia and Belarus as well as the fight against the pandemic."

Putin and Lukashenko had "taken advantage of the fine weather" and "gone on a boat trip", he said.

On Friday the two leaders held a formal meeting, and Lukashenko told Putin that the West was seeking to stir unrest in Belarus.

"An attempt is underway to rock the boat to reach the level of last August," Lukashenko said, referring to protests against his regime following a disputed election.

"It's clear what these Western friends want from us."

Lukashenko said he wanted to show Putin "some documents" related to the Ryanair grounding and thanked him for his support in the latest standoff with the West.

Putin gave his support to Lukashenko, warmly welcoming him and agreeing with him that the West's reaction to the grounding was "an outburst of emotion".

Referring to an aircraft grounding in 2013, Putin said: "At one time they forced the Bolivian president's plane to land and took him out of the plane, and nothing. Silence." He was referring to the aircraft of Evo Morales being forced to land in Austria at a time when the United States was trying to intercept the whistleblower Edward Snowden.

Russia, a close ally that sees the former Soviet republic of 9.5 million to its west as a strategically important buffer, had offered verbal support to Belarus before the Putin meeting, and dismissed speculation it was itself complicit in the grounding.

Russia says Belarus has shown a readiness for transparency in the row and has described the West's reaction to the grounding as "shocking", with Russia's Foreign Minister Sergey Lavrov accusing it of "demonizing" Belarus.

According to the Kremlin, Lukashenko has not sought additional economic assistance from Moscow, but the neighbors would work on "organizing the air link" between the neighbors following European Union restrictions.