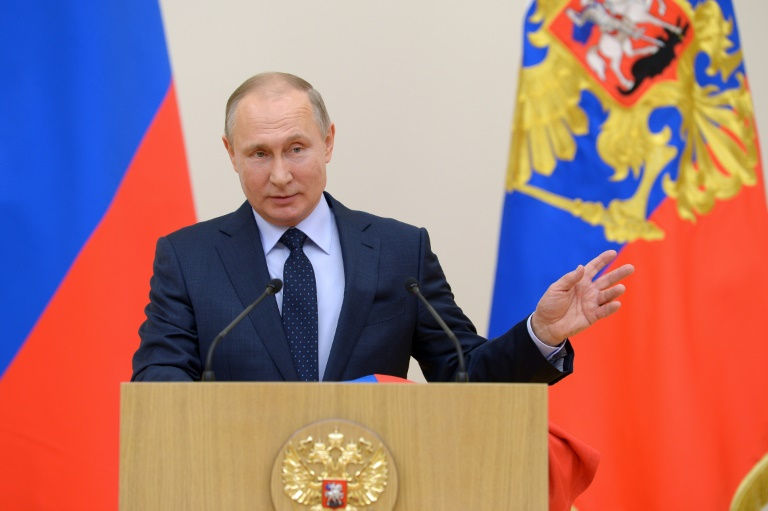 Russian President Vladimir Putin delivers a speech during a meeting with Russian athletes and team members who will take part in the 2018 Winter Olympics, at the Novo-Ogaryovo state residence outside Moscow on January 31, 2018. Photo: AFP/Alexey Nikolsky

President Vladimir Putin has ordered the government to organise a sports competition for Russian athletes banned from the upcoming Winter Games in Pyeongchang over a doping scandal, his spokesman said Wednesday.

Putin "reminded the cabinet of the decision to organise a competition for those of our athletes who had not been allowed to take part in the Olympic Games," Russian news agencies quoted Putin's spokesman Dmitry Peskov as saying.

He added that winning athletes would receive compensation equal to what Moscow normally awards Olympic medallists.

The International Olympic Committee banned Russia from next month's event in South Korea after a report on a vast Moscow-backed doping scheme in previous Games.

Olympic officials have cleared 169 Russian athletes for competition in Pyeongchang.

They will compete under a neutral flag as "Olympic Athletes from Russia."

Peskov spoke to reporters after Putin earlier Wednesday met with Russian athletes set to join Pyeongchang Games and said he was sorry "for not having been able to shield" them from the doping scandal.

Pro-Kremlin newspaper Izvestiya reported this week that the alternative competition for banned athletes would take place in the Black Sea resort of Sochi which hosted the 2014 Winter Olympic Games.

The 23rd Winter Olympics will open in Pyeongchang, South Korea, on February 9, featuring 102 events in 15 sports and athletes from all over the world.