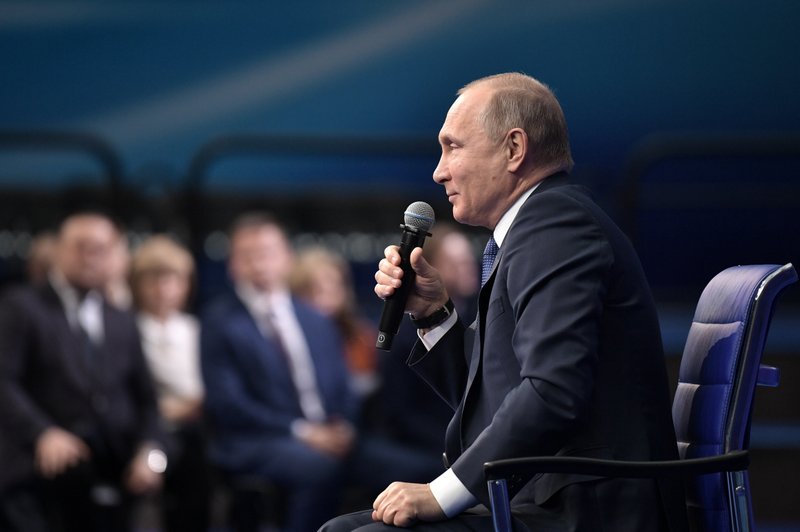 Russian President Vladimir Putin speaks to his supporters during a meeting for his campaign in Moscow, Russia, Tuesday, Jan. 30, 2018. (Photo: AP)

Putin wished Chinese President Xi Jinping good health, happiness and every success, and the Chinese people happiness and prosperity, according to the Kremlin's press service.

He also praised the "comprehensive trust-based partnership and strategic interaction" between Russia and China as well as their positive cooperation, saying that effective joint work of the two sides will continue in the coming year.

In his greeting message to US President Donald Trump, Putin underlined that Russia-US relations is of great importance to ensuring global security and stability and reaffirmed Russia's readiness to resume dialogue.

Putin hailed the "significant potential" of Russia's relations with various countries including Japan, France and Germany, saying that Russia looks forward to continuing constructive dialogue with their leaders and promoting cooperation in various fields.

Meanwhile, Putin expressed confidence in his address to South Korean President Moon Jae-in that the two countries will have closer interaction to help consolidate peace and stability on the Korean Peninsula and Northeast Asia in general.

He expressed confidence that joint efforts will lead to further growth in various areas and better coordination of efforts on key issues on the regional and global agenda within the UN, BRICS, the Shanghai Cooperation Organization (SCO), the Group of 20 (G20) and other multilateral bodies.