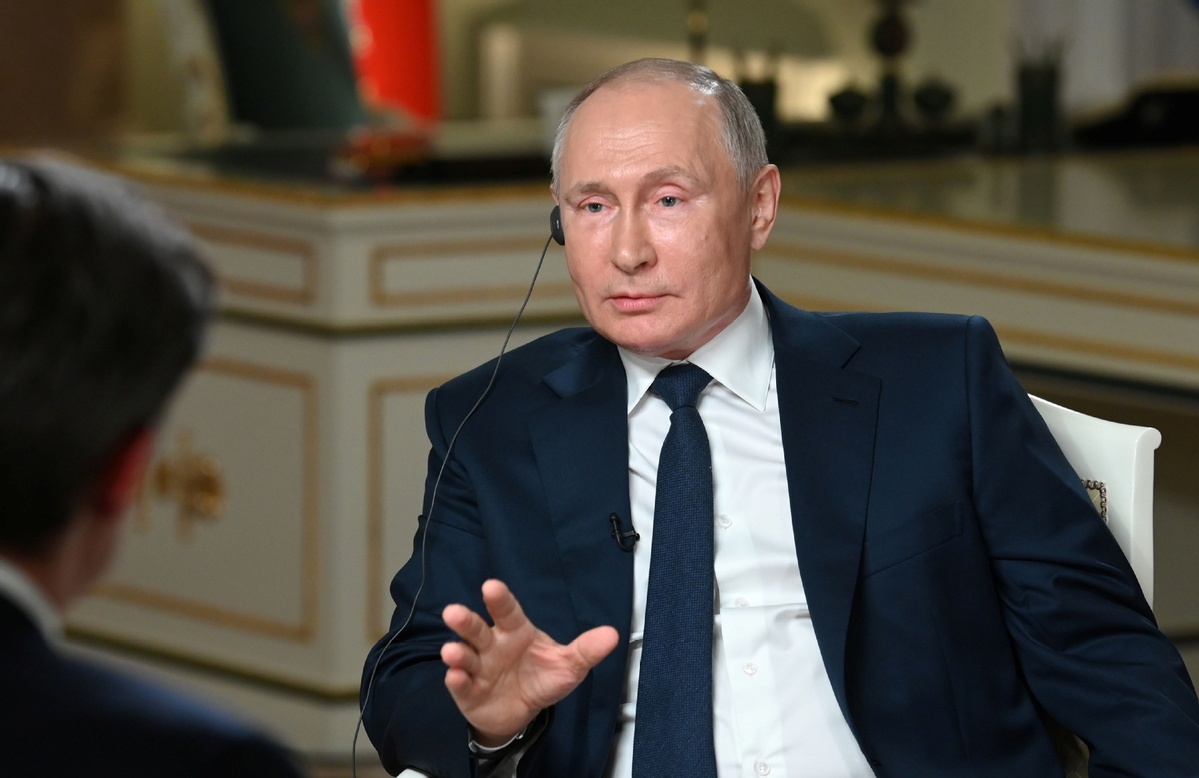 Russian President Vladimir Putin, who was scheduled to meet his US counterpart Joe Biden on Wednesday, said his country cherishes a "high level of trust and cooperation "with China, while refuting claims that Beijing poses a threat and abuses human rights in Xinjiang.

In a wide-ranging interview with NBC News that was aired on Monday, Putin also said China's arguments for not joining US-Russia arms control talks are "simple and understandable" as its nuclear power is far from the same level as the two countries.

Asked why he never complains about China's militarization, including reports about China working on its fourth aircraft carrier, Putin told the US network that over the past few decades, the two countries have developed a strategic partnership featuring a high level of trust and cooperation in politics, economy and technology and on military and technical cooperation.

"We do not believe that China is a threat to us," he said, despite what he described as Russia having a "defense sufficiency". "China is a friendly nation. It has not declared us an enemy, as the United States has done."

He said Russia is pleased with the "unprecedentedly high level" of the relationship as it has evolved over the past few decades.

"We cherish it, just like our Chinese friends cherish it, which we can see," he said, adding that there have been attempts to destroy the relationship between China and Russia that has been built up by practical policies.

"You said China will have four aircraft carriers. How many does the United States have?" he asked the NBC reporter.

During the 90-minute interview, Putin said it's for the Chinese to decide whether to engage in the nuclear arms-control negotiations. The US has prodded China to be part of the talks.

Putin said that the US and Russia are far ahead of China in terms of the stocks of ammunition and warheads and delivery vehicles.

"And the Chinese justly say, 'Why would we make reductions if we are already far behind what you have? Or do you want us to freeze our level of nuclear deterrence? Why should we freeze? Why we a country with a 1.5 billion population cannot at least set the goal of achieving your levels?'

"These are all debatable issues that require thorough consideration. But－making us responsible for China's position is just comical," Putin said.

The Russian president also said Moscow is not splitting off from Washington in the space program but will cooperate with Beijing in the arena.

"It doesn't mean that we need to work exclusively with the US," he said. "We have been working and will continue to work with China, which applies to all kinds of programs, including exploring deep space."

Asked to comment on China's treatment of the Uygurs in the Xinjiang Uygur autonomous region, Putin said that he had met some Uygurs, and that it's always possible to find individuals who criticize the central authorities.

The US has imposed sanctions on a number of Chinese citizens for so-called human rights abuses in Xinjiang, and a joint statement released on Sunday at the conclusion of the G7 summit, attended by Biden and other leaders of the group, also specifically mentioned the Xinjiang issue.

"I have met Uygurs on my trips to China, and I assure you at the very least what I heard with my own ears, that on the whole they welcome the policies of the Chinese authorities in this area," he said.

"They believe that China has done a great deal for people who live in this part of the country from the perspective of the economy, raising the cultural level, and so on and so forth."

Ahead of their first face-to-face conversation in Geneva since he took office, Biden said Putin is a "worthy adversary".

"I'm going to make clear to President Putin that there are areas where we can cooperate, if he chooses," Biden said on Monday in Brussels.

"And if he chooses not to cooperate and acts in a way that he has in the past relative to cybersecurity and some other activities, then we will respond. We will respond in kind."

Putin said in the TV interview that the US allegations that Russian hackers or the government itself were behind cyberattacks in the US were "farcical".

"We have been accused of all kinds of things: Election interference, cyberattacks and so on and so forth. And not once, not once, not one time, did they bother to produce any kind of evidence or proof. Just unfounded accusations," he said.