Putin says 'Football brings us together'

Russian President Vladimir Putin said he hoped fans, players and officials enjoyed their stay in Russia during the World Cup, which kicked off in Moscow on Thursday.

"Football is truly loved here and it is called love at first sight, since our first official match here in 1897," Putin said moments before the first match between Russia and Saudi Arabia at Luzhniki Stadium.

"I hope fans and teams enjoy their stay in Russia, an open, hospitable and friendly country with people who have the shared values.

"Football brings us altogether in one team, we are united by this spectacular game," he added. 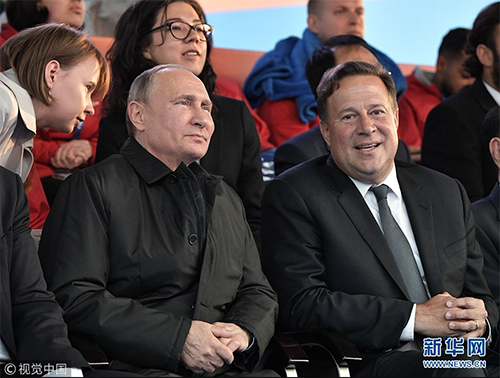 In a performance beyond the wildest dreams of even the most ardent home fans, two goals from substitute Denis Cheryshev were the highlight as Russia ended a seven-match run without a win in style.

Iury Gazinsky got the party started early, heading Russia in front in the 12th minute before Cheryshev rifled home a second shortly before half-time.

Another substitute, Artem Dzyuba, made it 3-0 with about 20 minutes remaining before a delicious late goal from Cheryshev with the outside of his left boot and a fifth from Aleksandr Golovin sealed the rout.

Victory for Russia, ranked a lowly 70th in the world -- three places below Saudi Arabia -- was vital for the home nation's hopes of progressing, with tougher games against Egypt and Uruguay to come.

"There are no words to express what I'm feeling right now. I'm happy we won and happy I could help my team," said man-of-the match Cheryshev.

"I felt very happy when I knew I would be here in the squad but I never dreamed of anything like this."