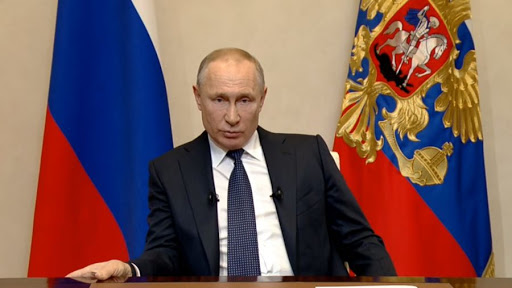 MOSCOW, May 25 (Xinhua) -- Russia is firmly committed to developing the comprehensive strategic partnership of coordination with China at a high level and is willing to strengthen strategic coordination between the two countries, President Vladimir Putin said Tuesday.

Russia is ready to work with China to defend multilateralism and contribute to preserving global strategic stability, Putin said in Sochi in a phone conversation with Yang Jiechi, a member of the Political Bureau of the Communist Party of China (CPC) Central Committee, who was attending the 16th round of China-Russia strategic security consultation in Moscow.

Putin asked Yang, who is also director of the Office of the Foreign Affairs Commission of the CPC Central Committee, to convey his cordial greetings to Chinese President Xi Jinping.

Putin said Russia-China relations are at the best in history and it is essential that the heads of state maintain close contact.

During the phone call, Yang relayed Xi's best regards and an oral message to Putin.

Thanks to the planning and strategic leadership of the two heads of state, the China-Russia comprehensive strategic partnership of coordination for a new era has been developing with a strong momentum, Yang said.

He noted that the two countries support each other firmly on issues concerning each other's core interests, set an example of a new type of international relations featuring mutual respect, fairness and justice, and win-win cooperation, and have injected precious stability and positive energy into the world that is experiencing turmoil and drastic changes.

As this year marks the 20th anniversary of the signing of the China-Russia Treaty of Good-neighborliness and Friendly Cooperation, Yang said China is ready to work with Russia to comprehensively implement the consensuses reached by the two presidents and turn the high-level political mutual trust into more results of strategic coordination.

Also on Tuesday, Yang and Secretary of the Security Council of the Russian Federation Nikolai Patrushev co-chaired the 16th round of China-Russia strategic security consultation.

They had an in-depth exchange of views and reached broad consensus on China-Russia relations and a number of major issues regarding global security and strategic stability.