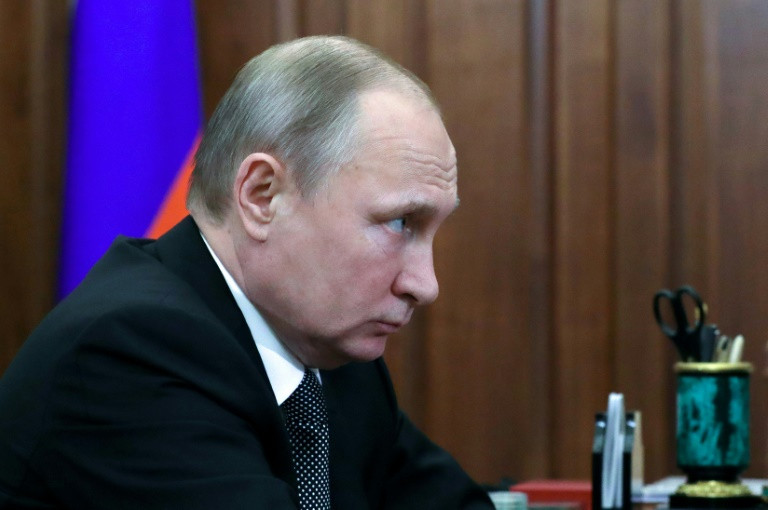 Russian President Vladimir Putin on Wednesday urged "common sense" to prevail in the spy poisoning crisis as London and Moscow faced off in a tense meeting at the world's chemical weapons watchdog.

Putin's plea came as Moscow expelled a Hungarian diplomat in a tit-for-tat move, just the latest escalation of tensions between Russia and the West since the nerve agent attack on a former Russian double agent a month ago.

"What we expect is that common sense will in the end prevail and there will not be this damage in international relations that we have seen recently," Putin said after summit talks in Ankara.

But at the start of a meeting of the Organisation for the Prohibition of Chemical Weapons (OPCW), London slammed as "perverse" a Russian proposal for a joint probe into the poisoning of ex-spy Sergei Skripal and his daughter Yulia.

"We will not agree to Russia's demand to conduct a joint investigation into the attack in Salisbury because the UK –- supported by many other countries -– has assessed that it is highly likely that the Russian state is responsible for this attack, and that there is no plausible alternative explanation," British chemical arms expert John Foggo told the OPCW executive council in The Hague.

OPCW experts have already taken samples at the site of the March 4 attack in Salisbury, and they are being analysed in its labs in The Hague, as well as in four other certified laboratories.

Britain has said the Skripals and a British police officer were exposed to a Soviet-designed nerve agent called Novichok.

OPCW chief Ahmet Uzumcu told the meeting he expected the results by his team "by early next week."

"The OPCW team worked independently and is not involved in the national investigation by the UK authorities," he insisted.

The crisis has sent the long-difficult relations between Russia and the West plummeting to new lows. Both sides have already expelled scores of diplomats.

Russian foreign intelligence chief Sergei Naryshkin warned Wednesday in a speech in Moscow that both sides must avoid tensions escalating to the dangerous levels of the Cold War.

And he said that accusations of Moscow engineering the attack were a "grotesque provocation ... crudely concocted by the British and American security services".

At a closed-door OPCW meeting convened at Moscow's request, Russia insisted it was ready to cooperate.

"We hope that at the end of this meeting, we will reach a decision which will lead us out of this impasse," said Russia's deputy foreign minister Sergei Riabkov, speaking in Moscow.

"Otherwise we will find ourselves in a situation where we have even more reason to highlight our serious grievances with Britain and its supporters."

But the British delegation to the OPCW said in a Tweet that "Russia's proposal for a joint, UK/Russian investigation into the Salisbury incident is perverse. It is a diversionary tactic."

Foggo added that Russia was dodging all of London's questions, and had made a series of "shameless, preposterous" statements.

"Russia's refusal to accept the results of the OPCW's investigation unless Russian experts participate in it suggests that Russia is opposed .... nervous about what the results will show," he said.

But in a move hailed as a vindication by Moscow, the British defence laboratory at Porton Down analysing the nerve agent revealed Tuesday that it could not say whether the substance came from Russia.

A diplomatic source, who asked not to be named, told AFP that Russia had tabled a motion at the the OPCW asking to "involve Russia in some way or another in the investigation".

Under the rules of the Chemical Weapons Convention, it is up to Britain to lead the inquiry, with technical assistance from the OPCW which is acting in a "totally independent manner," the source said.

Russia has accused the West of wanting to put up a new Iron Curtain and warned of a return to the mutual isolation of the Cold War.

"It has reached such proportions and developed such ludicrous characteristics, that it's time to talk about the return of the grim times of the Cold War."