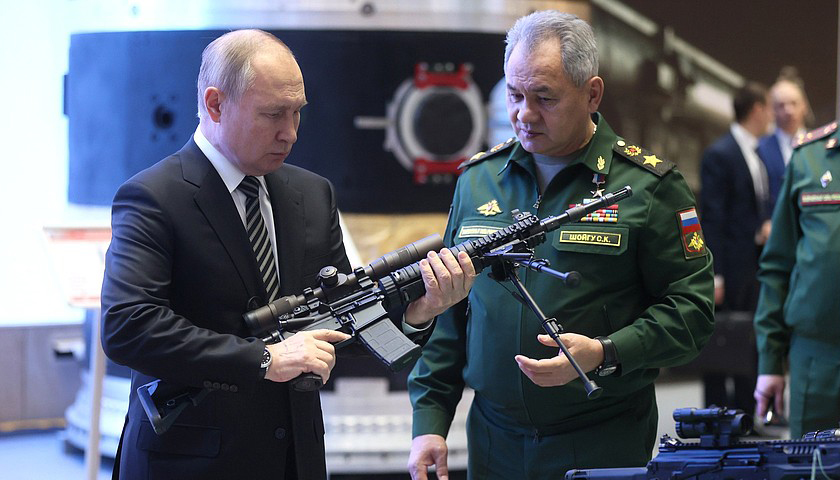 Russian President Vladimir Putin is seen with Defense Minister Sergei Shoigu after an expanded meeting of the Defense Ministry Board in Moscow on Dec 21, 2021. (Photo: Xinhua)

Russian President Vladimir Putin said Tuesday that his country will take countermeasures if the West continues its "aggressive" policy, but remains ready for negotiations.

"If our Western colleagues continue their clearly aggressive line, we will take adequate retaliatory military-technical measures to respond firmly to hostile actions," Putin said at an expanded meeting of the Russian Defense Ministry Board.

"We have every right to do so, to take actions aimed at ensuring the security and sovereignty of Russia," he said, expressing concerns over the deployment of U.S. missile defense systems near Russian borders, including in Romania and Poland.

He warned if the United States and the North Atlantic Treaty Organization (NATO) deploy missiles in Ukraine, they would reach Moscow in only seven to 10 minutes, and in just five minutes if they are hypersonic weapons.

"They must understand that we simply have nowhere to retreat," Putin said.

Russia has recently sent a draft agreement to NATO and a draft treaty to the United States both on security guarantees in Europe for the Western countries to consider.

Putin reiterated that Russia stands against armed conflict and bloodshed and wishes to resolve issues through diplomacy, but there must be clear legal guarantees.