Puzzling number of men tied to Ferguson protests have died 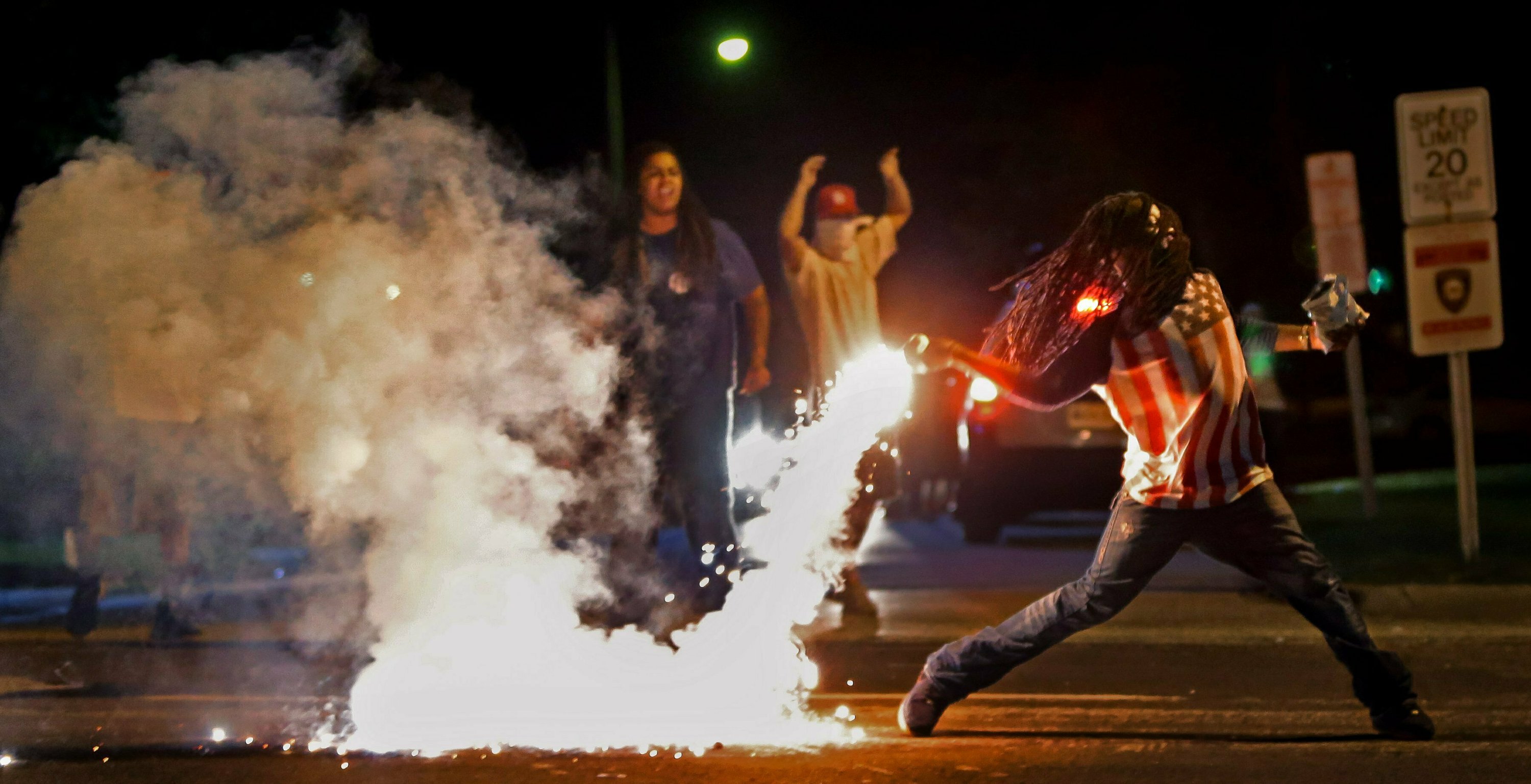 In this Aug. 13, 2014, file photo Edward Crawford Jr., returns a tear gas canister fired by police who were trying to disperse protesters in Ferguson, Mo. Six young men with connections to the Ferguson protests, including Crawford, have died, drawing attention on social media and speculation in the activist community that something sinister is at play. Police say there is no evidence the deaths have anything to do with the protests and note that only two were homicides. But activists and observers remain puzzled and wonder if they'll ever get answers. Crawford fatally shot himself in May 2017 after telling acquaintances he had been distraught over personal issues, police said. (Photo: AP)

Two young men were found dead inside torched cars. Three others died of apparent suicides. Another collapsed on a bus, his death ruled an overdose.

Six deaths, all involving men with connections to protests in Ferguson, Missouri, drew attention on social media and speculation in the activist community that something sinister was at play.

Police say there is no evidence the deaths have anything to do with the protests stemming from a white police officer’s fatal shooting of 18-year-old Michael Brown, and that only two were homicides with no known link to the protests.

But some activists say their concerns about a possible connection arise out of a culture of fear that persists in Ferguson 4 ½ years after Brown’s death, citing threats — mostly anonymous — that protest leaders continue to receive.

The Rev. Darryl Gray said he found a box inside his car. When the bomb squad arrived, no explosives were found but a 6-foot (1.8-meter) python was inside.

“Everybody is on pins and needles,” Gray said of his fellow activists.

No arrests have been made in the two homicides. St. Louis County police spokesman Shawn McGuire said witnesses have simply refused to come forward, leaving detectives with no answers for why the men were targeted.

“We don’t believe either one was connected to each other,” McGuire said, but adding, “It’s tough to come up with a motive without a suspect.”

Ferguson erupted in protests in August 2014 after officer Darren Wilson fatally shot Brown during a street confrontation. Brown was unarmed, but Wilson said he fired in self-defense when the black teenager came at him menacingly.

A grand jury declined to charge Wilson in November 2014, prompting one of the most violent nights of demonstrations, and one of the first activist deaths.

Deandre Joshua’s body was found inside a burned car blocks from the protest. The 20-year-old was shot in the head before the car was torched.

Four others also died, three of them ruled suicides.

— MarShawn McCarrel of Columbus, Ohio, shot himself in February 2016 outside the front door of the Ohio Statehouse, police said. He had been active in Ferguson.

— Edward Crawford Jr., 27, fatally shot himself in May 2017 after telling acquaintances he had been distraught over personal issues, police said. A photo of Crawford firing a tear gas canister back at police during a Ferguson protest was part of the St. Louis Post-Dispatch’s Pulitzer Prize-winning coverage.

— In October, 24-year-old Danye Jones was found hanging from a tree in the yard of his north St. Louis County home. His mother, Melissa McKinnies, was active in Ferguson and posted on Facebook after her son’s death, “They lynched my baby.” But the death was ruled a suicide.

— Bassem Masri, a 31-year-old Palestinian American who frequently livestreamed video of Ferguson demonstrations, was found unresponsive on a bus in November and couldn’t be revived. Toxicology results released in February showed he died of an overdose of fentanyl.

The Ferguson protests added momentum to the national Black Lives Matter movement, but they also generated resentment from people angered by TV footage of protesters hurling rocks and insults at police. Amid lingering anger, activists and observers say that while they see no clear connection between the deaths and the protests, they can’t help but wonder about the thoroughness of the investigations.

“These protesters and their deaths may not be a high priority for (police) since there is this antagonistic relationship,” Washington University sociologist Odis Johnson said. “I think there is a need for them to have a greater sense of urgency.”

Activists say that in the years since the protests, they have been targeted in dangerous ways.

“Something is happening,” said Cori Bush, a frequent leader of the Ferguson protests. “I’ve been vocal about the things that I’ve experienced and still experience — the harassment, the intimidation, the death threats, the death attempts.”

Bush said her car has been run off the road, her home has been vandalized, and in 2014 someone shot a bullet into her car, narrowly missing her daughter, who was 13 at the time.

She suspects white supremacists or police sympathizers. Living under constant threat is exhausting, she said, but she won’t give in.

“They shut us up and they win,” Bush said.

It’s unclear if residual stress from the protests or harassment contributed to the suicides, but Johnson said many activists feel a sense of hopelessness.

Experts say the deaths also are indicative of a concern at the core of the protests — the underlying difficulty of life for young people of color. Five of the men who died were blacks in their 20s.

Black St. Louis County residents are three times more likely than whites to be poor, often meaning they lack adequate health insurance that could allow them to better address not only physical ailments but mental health issues like depression and anxiety.

Forty-five of the county’s 60 homicide victims last year were black in a county where less than a quarter of the population is black, according to police statistics.

“Here in St. Louis, unfortunately, we have allowed the culture of crime and violence to morph into dimensions that anybody’s at risk any day, any time,” said James Clark of the nonprofit Better Family Life.