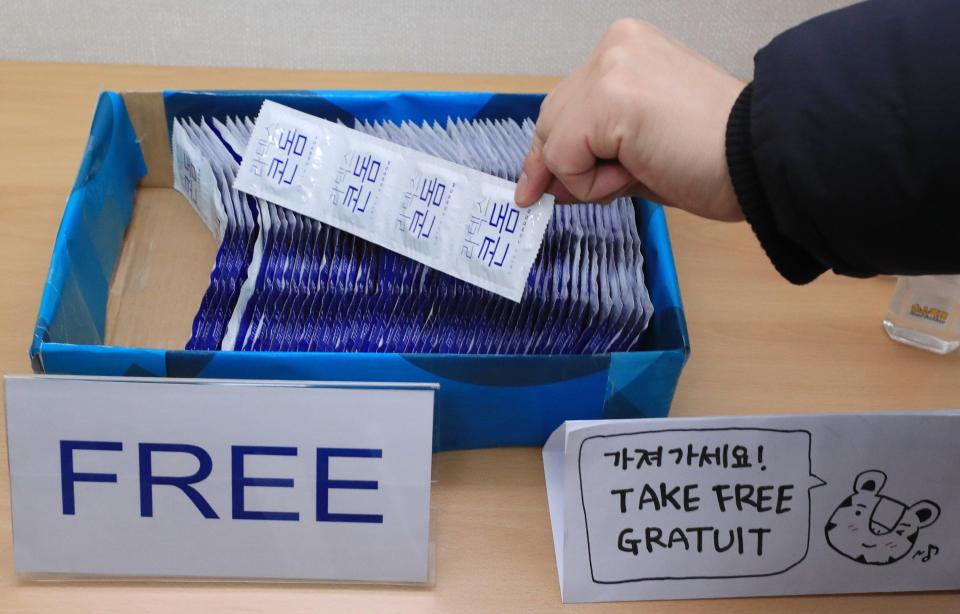 While the PyeongChang Winter Olympics has set a record for inviting the most countries and athletes for a Winter Olympics, the event has other record ― 110,000 free condoms.South Korean condom manufacturer BRSG has donated 100,000 of its "Original Natural Fit" products "to wish the Olympic Games' success and prevent the spread of HIV." Originally sold in packages containing a different number of condoms ― a packet of 12 retails for 7,900 won ($7.30) ― the products for the Olympics will be repackaged separately, with "Latex Condom" printed in Korean on each packet. Korean Association for AIDS Prevention donated 10,000 condoms.But from the athletes' point of view, the item may not be just for the health. A nurse named Shirley Jenkins at the 1996 Atlanta Summer Olympics was quoted in The Mirror as saying condoms were "ordered just in case the athletes happen to be in the mood."During the 2010 Winter Olympics in Vancouver and the 2014 Sochi Winter Olympics, 100,000 condoms were provided ― 10,000 fewer than for PyeongChang.At PyeongChang, condoms will be available at the Main Press Center in the city, the media village, medical offices and in men's and women's washrooms.Considering the number of athletes ― 2,925 ― 37 condoms are available for each person.The condom giveaway started during the 1988 summer Olympics in Seoul, where 8,500 condoms were available. A record number 450,000 condoms were available free at the 2016 Summer Olympics in Rio de Janeiro. These included, for the first time in Olympics history, 100,000 prophylactics for females. About 100,000 condoms for the 2008 Beijing Winter Games carried the words "Faster, Higher, Stronger." Four years ago, at the Athens Summer Games, Durex donated 130,000 condoms as well as 30,000 sachets of lubricant "to smooth the performance of the world's elite sports people in the arena and under the covers," according to Reuters.