WORLD Pyongyang's reasonable demands for safety should be responded

Pyongyang's reasonable demands for safety should be responded

US Secretary of State Mike Pompeo paid his third visit to the Democratic People's Republic of Korea (DPRK) on Sunday. 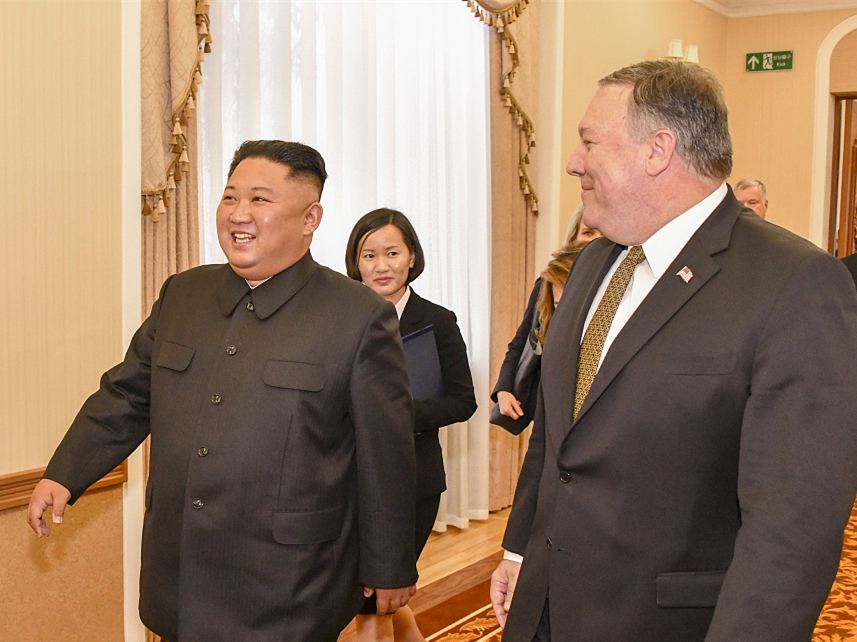 He held talks with the DPRK's top leader Kim Jong Un. The two sides agreed their countries would hold a second summit as quickly as possible.

Kim also invited international inspectors to visit the Punggye Ri nuclear test site to confirm that it has been irreversibly dismantled.
Despite the current mood of detente in the DPRK-US relations, the two sides still need to overcome their yawning differences prior to reaching a complete denuclearization of the Korean Peninsula.
Under a joint statement signed by Kim and US President Donald Trump in Singapore in June, the United States committed to providing a security guarantee to the DPRK in return for Pyongyang's commitment to denuclearize.
However, US-DPRK talks have been stuck in an impasse because of differences over the scale of denuclearization, stiff US sanctions, and whether to issue a war-ending declaration.
At the 73rd UN General Assembly, DPRK Foreign Minister Ri Yong Ho demanded the United States take steps to secure Pyongyang's trust before it denuclearizes.
"Without any trust in the US there will be no confidence in our national security and under such circumstances there is no way we will unilaterally disarm ourselves first," Ri said.
"The DPRK government's commitment to denuclearization is solid and firm. However, it is only possible if the US secures our sufficient trust toward the US," he said.
Even before the Singapore summit, the DPRK stopped all nuclear and ballistic missile tests and dismantled the Punggye Ri nuclear test site as a gesture of goodwill.
"However, we do not see any corresponding response from the US On the contrary, instead of addressing our concern for the absence of peace regime in the Korean Peninsula, the US insists on 'denuclearization-first' and increases the level of pressure by sanctions to achieve their purpose in a coercive manner, and even objecting the 'declaration of the end of war,'" Ri added.
Washington and Pyongyang have sparred over the exact terms of the vaguely-worded deal in Singapore. The United States insists on maintaining sanctions and pressure against the DPRK until its "final, fully verified denuclearization."
During the first stop of his Asia tour, Pompeo met with Japanese Prime Minister Shinzo Abe. The two allied countries reaffirmed that UN sanctions should be implemented until the DPRK denuclearizes.
Furthermore, the DPRK says a declaration ending the 1950-53 Korean War should not be used as a bargaining chip in denuclearization talks.
A commentary released by the official Korean Central News Agency (KCNA) on Oct. 2 said "now that the DPRK and the US are aspiring after the establishment of new relations true to the spirit of the June 12 DPRK-US joint statement, it is quite right to put an end to the belligerent relations between them."
"But, if the US doesn't want the end of war, the DPRK will also not particularly hope for it."
Besides holding firm on its own sanctions against the DPRK, the United States is also meddling in the improving ties between the DPRK and South Korea.
On Wednesday, Trump told reporters at the White House that South Korea will not lift sanctions on Pyongyang without US approval, after South Korean Foreign Minister Kang Kyung-wha suggested during a parliamentary audit that Seoul was considering easing its own sanctions against the DPRK to encourage its denuclearization.
"They do nothing without our approval," Trump said publicly.
In Seoul, South Korea's foreign minister confirmed reports that Pompeo expressed displeasure over an agreement reached between the DPRK and South Korea last month to reduce conventional military threats between them.
Even though the world has witnessed positive development concerning the Korean Peninsular nuclear issue over the last few months, including increased visits and dialogue, mutual trust and sincerity are still lacking in the interactions on the ground.
Chinese Foreign Minister Wang Yi has said that the Peninsula issue is one of security in essence, and the DPRK's reasonable demands for safety and development should be responded positively.