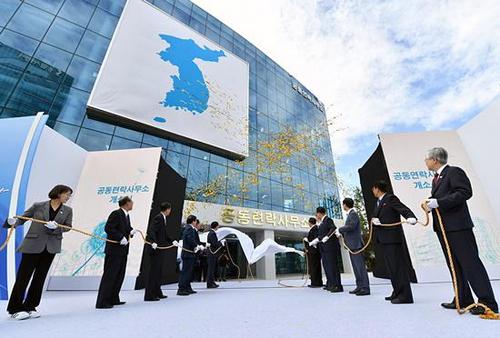 Kwon Jong Gun, director general of the Department of U.S. Affairs of the Foreign Ministry, said in a statement carried by the official Korean Central News Agency that "it is really preposterous to hear the balderdash of South Korean authorities -- who do not have either any qualification to discuss or the position to poke their noses into the matters between the DPRK and the U.S., to say nothing of nuclear issues -- commenting on the resumption of DPRK-U.S. dialogue and interpreting the issue of denuclearization at their own choice."

Kwon said it is not because there is not a mediator that the DPRK-U.S. dialogue has broken down and the denuclearization blown off, but it is because "conditions are not met" for denuclearization.

Negotiations between the DPRK and the United States were stalled after the summit between the top leaders of the two countries in Hanoi in February last year failed to reach an agreement on the denuclearization process in the Korean Peninsula.

"I want to make it clear that we will continue to build up our force in order to overpower the persistent threats from the United States, and such efforts of ours are in fact continuing at this point of time," Kwon said.

"If they want to deal with us, they will have to approach us after racking their brains and finding a different method," as "we are not what we were two years ago," he added.

On Tuesday, the DPRK cut off all inter-Korean communication lines in protest against South Korean authorities for allowing "defectors" to fly leaflets across the border, which it described as a hostile act which breached a series of peace agreements between the two sides.