Python owner was killed by his 8ft-long pet, coroner rules 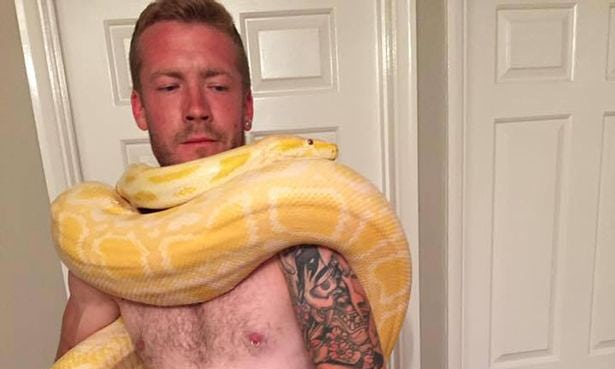 A lover of exotic animals died of asphyxia after his 2.4-metre (8ft) pet African rock python called Tiny wrapped itself around him, a coroner has ruled.

Dan Brandon was found dead by his mother, Babs, in his bedroom in Hampshire, with the python concealed close by.

The coroner for north-east Hampshire, Andrew Bradley, recorded a verdict of misadventure, saying he believed the python was “instrumental” in Brandon’s death. He made clear he did not believe the snake had been aggressive towards its owner, but the most likely scenario was that the reptile had been coiling around him in an affectionate way.

Brandon, 31, died in the village of Church Crookham on 25 August. As well as Tiny, his bedroom was home to another nine snakes and 12 tarantulas.

The inquest in Basingstoke was told that Brandon was a responsible snake owner who loved his pets. His mother told the inquest that Tiny sometimes appeared aggressive.

She said: “She would get cross and hiss and pretend to strike. He [Brandon] would say: ‘For goodness’ sake, Tiny.’ At other times he would tell me: ‘Mum, you’ve got to come and look, she’s being really good today.’ I don’t think he ever got bit by Tiny.

“He was more wary of Tiny than the other snakes. He said she’s very strong. He had stopped putting her round his neck because she was so strong and unpredictable.”

Since her son’s death she has been caring for the snakes. She showed the court a hand injury she had recently suffered when another of the snakes bit her.

She said her son had kept snakes since he was 15. When Brandon got Tiny he could hold it in his hand. “She was his baby. She loved him,” she said, adding that if she was in her son’s bedroom with him the snake would strike at her “as if to say ‘leave him alone’.”

Babs Brandon told the court that on the evening of her son’s death she was cooking dinner when she heard a crash in his bedroom. She found him face down on the floor and Tiny was missing from its vivarium. Paramedics were called but Brandon, a landscape worker, could not be saved. She told the court that she had no idea how he had died.

A postmortem carried out by the pathologist Dr Adnan al-Badri found that Brandon’s lungs were four times heavier than would be expected and he had suffered pinpoint haemorrhages in one of his eyes – signs of asphyxia. He also had a recently fractured rib.

Badri said: “It’s possible that some sort of pressure was applied to the neck or chest that caused him to asphyxiate.” However, there were no marks around his neck or chest.

Prof John Cooper, a vet and snake keeper, said he had visited Brandon’s bedroom and examined Tiny. He said he had been impressed by the conditions Brandon kept his snakes in. “He was an experienced herpetologist who cared for his reptiles and would have had a good relationship with his animals. He did not have them for macho reasons.”

Cooper said Brandon would have known how to unwrap a python that had coiled around him, explaining that the trick was to start with the tail. He said it was uncommon for snakes in captivity to cause serious injuries but told the court that he himself had been struck in the eye by an African rock python. He said Tiny had struck out at him “defensively” as he put it back in its vivarium after examining the snake.

He said he did not believe Tiny had strangled Brandon, nor would it have wrapped itself around him for warmth – as is thought to have happened when a python killed two boys in Canada in 2013 – as it was a hot day.

The coroner said he did not believe the snake had been aggressive towards Brandon. He said: “The most likely scenario is that that Tiny was engaged with Dan. I have no doubt she was coiling around him. There was a point at which either she took hold of him unexpectedly or trips him up or there is some other mechanism. She then makes off maybe because of the shock of him falling or the shock of his reaction. I have to accept that Tiny is instrumental in Dan’s death.”

He said he believed that in a “moment of peace” Brandon was “communing” with the snake and it “went wrong” for some reason. “He is asphyxiated as a result of his contact with Tiny.”

Outside court, Babs Brandon said she constantly relived the evening of her son’s death. She said: “All the family wanted was answers to our questions and I have no idea yet whether we have that or ever will.”