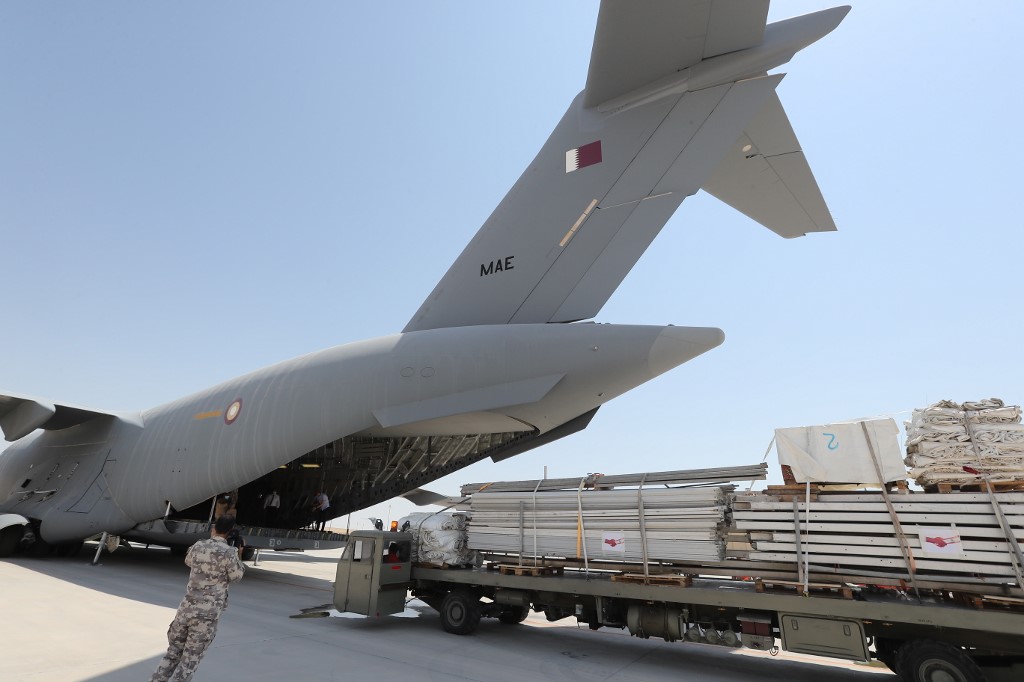 Workers load a plane as Qatar begins sending field hospitals and medical aid to Lebanon from the al-Udeid airbase on August 5, 2020 on the outskirts of Doha. (Photo: AFP)

It was one of four due to fly from the Gulf to the Mediterranean country Wednesday.

Officers estimated at least 7,000 pounds (3,175 kilogrammes) of aid would be flown on the inaugural flight, with two hospital units equipped with up to 550 beds due in Beirut by day's end.

Qatar's ruler Emir Sheikh Tamim bin Hamad al-Thani said on Tuesday that he spoke to Lebanese President Michel Aoun in the wake of the explosions at Beirut's port and offered the medical aid.

Qatar was ready "to provide immediate support following the explosion at the port," he tweeted.

Workers placed personal protective equipment kits on the seats of crew bound for Rafic Hariri airport in Beirut, which was already in the midst of a medical crisis amid a resurgence of coronavirus cases.

"If there's news about humanitarian stuff, there's a high probability we'll be on one of the flights," said one of the pilots on the first of the aid relays to Lebanon from behind the controls of the Globemaster aircraft.

Around him crew and loadmasters secured the frames that will form the field hospitals that Lebanese media reported will be erected at strategic points around the capital Beirut.

Pilots at Al-Udeid, the largest airstrip in the Middle East and also the United States' biggest airbase in the region, have been involved in COVID-19 relief flights in recent months.

Gas-rich Qatar has sent extensive medical aid to its allies including China and Italy throughout the coronavirus pandemic as it uses its logistical clout and deep pockets to cement diplomatic ties.

Commanding officers "started calling last night, giving orders to prepare. It's not a normal flight, but it's part of the job," said a second pilot on the first flight to leave.