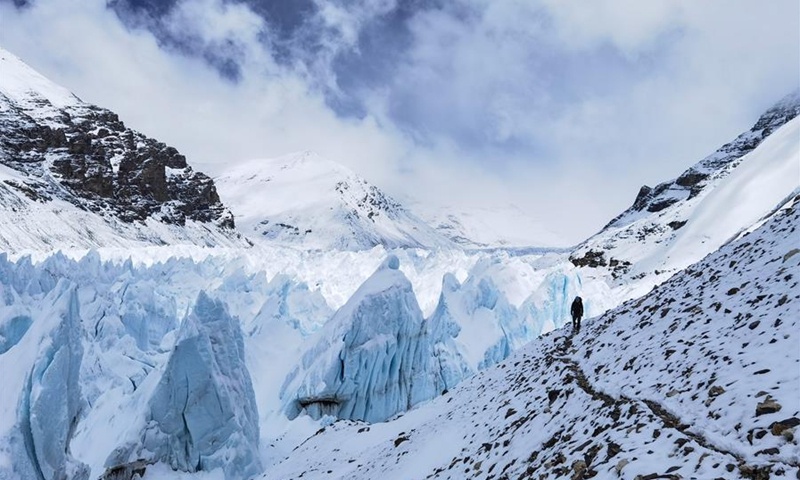 Aerial photo taken on May 22, 2020 shows a view of the East Rongbuk glacier on Mount Qomolangma. (Photo: Xinhua)

As the second wave of a COVID-19 outbreak has ravaged Nepal in recent days, the epidemic has hit the top of the world as 17 positive cases among climbers in the local base camp at Mount Qomolangma, commonly known in the West as Mount Everest, were reported.

Experts said that the lower temperatures and lack of oxygen from high altitude at the camp could worsen the epidemic situation, while mountaineers reached by the Global Times said they are self-isolating still in hope of carrying out their annual ascent to the 8,848-meter summit.

The Himalayan Rescue Association, which runs a government-led medical clinic at the Qomolangma base camp in Nepal, said that it had received confirmation of 17 positive COVID-19 cases in some climbers who have been flown out to Kathmandu by expedition teams, the BBC reported on Wednesday.

The Nepalese government has so far released no information on the number of positive cases confirmed at the base camp.

Maizi Maliyamu, a mountaineer from Xinjiang and a member of the Chinese expedition team, which is currently at the base camp in Nepal, told the Global Times on Thursday that all flows of personnel have had restrictions imposed on them except for necessary transportation and rescue workers.

Expedition teams from various countries that are already in the base camp are now self-isolating in their tents, but training for the upcoming annual ascent remains unaffected. No notice has been received from the Nepalese government to suspend training activities.

There are zero reports on COVID-19 infections among Chinese climbers as of press time, the Chinese mountaineering team revealed to the Global Times.

While rising numbers with COVID-19 symptoms and confirmed positive cases are being found among Qomolangma goers, the base camp has not been able to equip a coronavirus testing facility at the health clinic, making it difficult to identify climbers with symptoms such as cough, fever or fatigue.

Maliyamu explained that it has become more challenging to detect coronavirus infections since pneumonia and kelp cough have been very common throughout the years, and they would show similar symptoms to that seen in COVID-19 patients.

"So now the medical team and volunteers at the camp are flying all those who have developed suspected symptoms on helicopters to Kathmandu hospitals to get COVID-19 tests and treatments," she told the Global Times on Wednesday.

Kathmandu city is now in a lockdown, and all international flights have been canceled, Maliyamu added.

Yang Zhanqiu, deputy director of the pathogen biology department at Wuhan University, told the Global Times on Thursday that the lower temperature and high density of people gathering at the camp could worsen the spread of the virus.

He added that the lack of oxygen due to high altitude may lead to failures in the lungs, which could cause breathing difficulties in infected patients, and lead to more serious symptoms.

Over 1,500 enthusiasts, of whom 408 have obtained certificates, are now stuck in their tents at the base camp, struggling to fend off the virus while waiting for the window of summiting to open up, reported the Himalaya Forum on Thursday, an information sharing platform widely used by mountaineers at Mount Qomolangma.

Nepal has recorded a total of 359,610 confirmed COVID-19 cases, with 3,475 deaths as of Thursday, according to The Kathmandu Post.