WORLD Quake aftershocks keep people out of homes in Croatia

Quake aftershocks keep people out of homes in Croatia 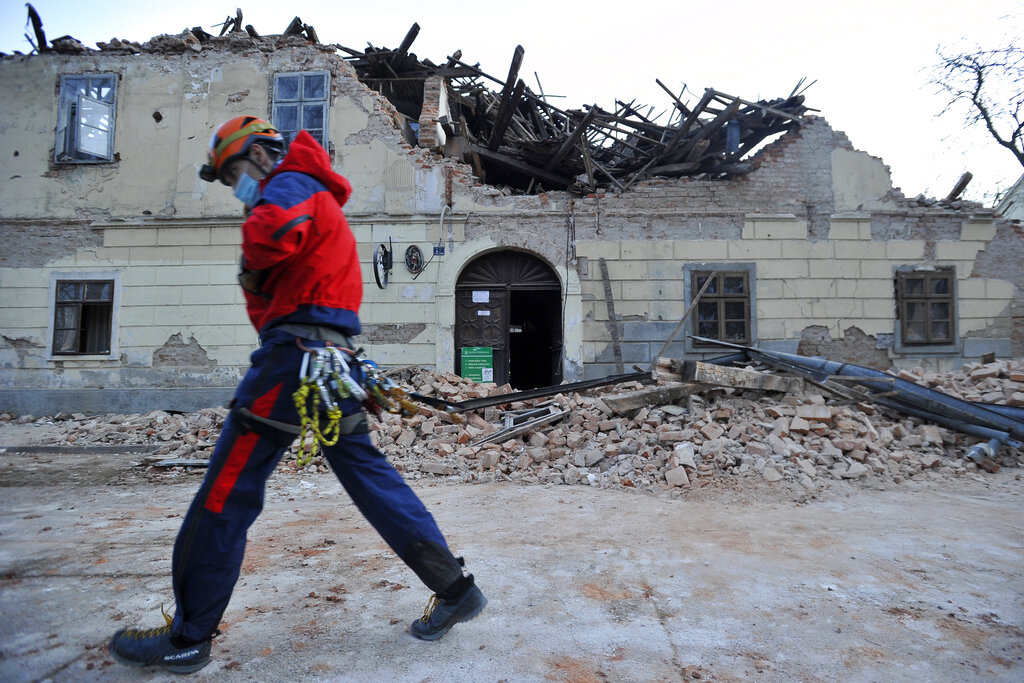 A rescuer walks past a building damaged in an earthquake in Petrinja, Croatia, Tuesday, Dec. 29, 2020. (Photo: AP)

The strongest, 4.7-magnitude tremor was recorded near the heavily damaged town of Petrinja, some 40 kilometers (25 miles) southeast of the capital, Zagreb. Many people had spent the night in tents, their cars or military barracks.

Neven Pavkovic, a resident, said the aftershocks kept him awake: "It was a rough night, I slept maybe half an hour.”

In the hard-hit village of Majske Poljane, where five people died, a little boy could be seen sleeping in a van on the chilly morning.

Sobbing villagers said they received blankets, food and other aid but don’t know what they will do next. Rain that fell overnight turned the dust from the rubble into mud, adding to the hardship.

“We can’t say ‘Good morning,’ It is not good,” Petrinja mayor Darinko Dumbovic told Croatian radio. “We had the third and fourth tremors this morning, short ones but strong. What hasn’t fallen off before is falling now from the ruins of Petrinja.”

“Fear has crept into people," he said.

Pope Francis prayed for the victims. At the end of his weekly audience, he said: ”I particularly pray for those who died and for their families.”

Prime Minister Andrej Plenkovic said the government will declare Saturday a day of national mourning. As the government abolished a travel ban between counties that was imposed during the holidays because of the coronavirus pandemic, Plenkovic appealed for respect for other measures.

“We are still fighting COVID-19, it wouldn’t be good to relax now,” Plenkovic said at a government session.

Rescuers spent the night searching through the rubble of heavily damaged buildings for possible survivors.

Officials said a 12-year-old girl died in Petrinja, a town of some 25,000 people. At least 26 people were hospitalized with injuries.

Tuesday's quake, the strongest in Croatia since the introduction of the modern seismic measurement system, was felt throughout the region, including neighboring Bosnia, Serbia and Slovenia.

The central Croatian region was also struck by a 5.2 earthquake on Monday.