Under Haiti's burning heat, Jennie Auguste lies with a lost, thousand-yard stare on a flimsy foam mattress placed on an airport's tarmac. A resident of the southwestern part of the Caribbean nation, Auguste has wounds in the chest, abdomen and arm after the roof of the store she worked at collapsed during a powerful earthquake over the weekend. 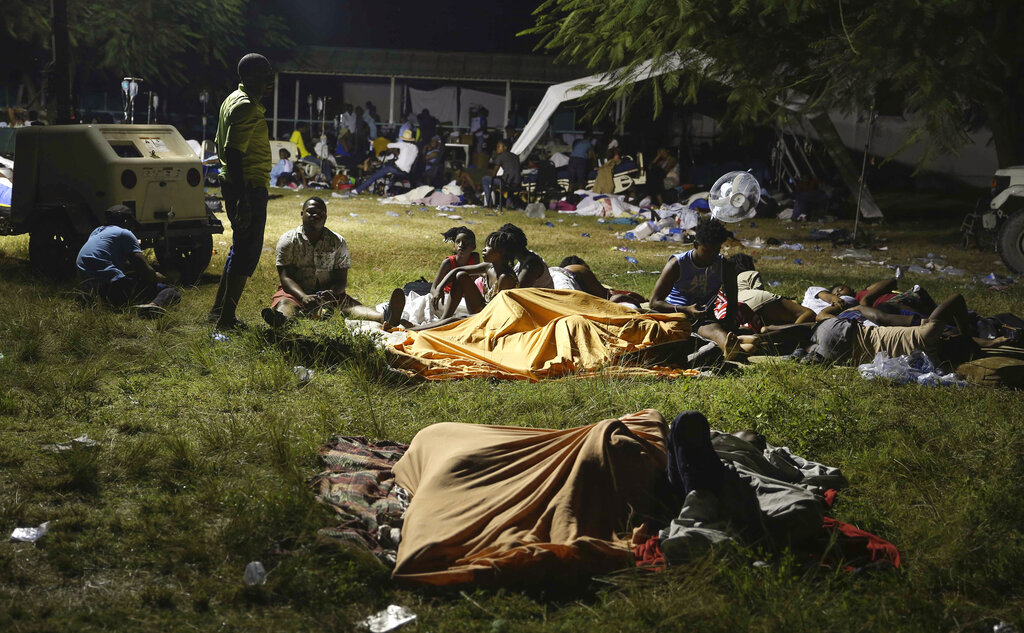 People displaced from their earthquake destroyed homes spend the night outdoors in a grassy area that is part of a hospital in Les Cayes, Haiti, late Saturday, Aug. 14, 2021. A powerful magnitude 7.2 earthquake struck southwestern Haiti on Saturday. (Photo: AP)

She flashes the occasional grimace of pain while her sister or other helpful bystanders fan her. In the badly damaged coastal town of Les Cayes, health care is at capacity, so Auguste can now only wait — for space at a local hospital, or a spot on one of the small planes that are ferrying injured people to Haiti's capital.

"There has been nothing. No help, nothing from the government," Auguste's sister, Bertrande, said Sunday as Haitians were still trying to take stock of everything around them as the death toll from disaster soared.

The country's Civil Protection Agency said 1,297 dead from the magnitude 7.2 earthquake had been counted by Sunday, a day after the temblor turned thousands of structures into rubble and set off frantic rescue efforts ahead of a potential deluge from an approaching storm.

The devastation could soon worsen with the coming of Tropical Depression Grace, which is predicted to reach Haiti on Monday night. The civil protection agency said Haitians must expect strong winds, heavy rain, rough seas, landslides and flooding.

The quake centered about 125 kilometers (78 miles) west of the capital of Port-au-Prince nearly razed some towns and triggered landslides that hampered rescue efforts in a country that is the poorest in the Western Hemisphere. It already was struggling with the worsening poverty, the coronavirus pandemic, the political uncertainty following the July 7 assassination of President Jovenel Moïse and a wave of gang violence.

In a scene widely repeated across the quake zone, families salvaged their few belongings in Les Cayes and spent the night on a soccer field. People lined up to buy what little was available: bananas, avocados and water at a street market.

Workers tore through rubble of collapsed buildings with heavy machinery, shovels and picks.

Underlining the dire conditions, local officials had to negotiate with gangs in the seaside district of Martissant to allow two humanitarian convoys a day to pass through the area, the U.N. Office for the Coordination of Humanitarian Affairs reported. The agency called Haiti's southern peninsula a "hotspot for gang-related violence," where humanitarian workers have been repeatedly attacked.

The agency said the area has been "virtually unreachable" over the past two months because of road blocks and security concerns. Agency spokeswoman Anna Jefferys said the first convoy passed through Sunday with government and U.N. personnel. She added that the U.N.'s World Food Program plans to send in food supplies via trucks Tuesday.

Prime Minister Ariel Henry has declared a one-month state of emergency for the whole country and said that first aid convoys organized by the government had started moving help to areas where towns were destroyed and hospitals were overwhelmed.

"We salute the dignity, the resilience effort of the victims and their ability to start over," Henry told reporters. "From my observations, I deduce that Haitians want to live and progress. Let us unite to offer these people a living environment conducive to development."

Alluding to the 2010 earthquake that ravaged Haiti's capital, killing tens of thousands, Fore said: "Little more than a decade on, Haiti is reeling once again. And this disaster coincides with political instability, rising gang violence, alarmingly high rates of malnutrition among children, and the COVID-19 pandemic — for which Haiti has received just 500,000 vaccine doses, despite requiring far more."

The country of 11 million people received its first batch of U.S.-donated coronavirus vaccines only last month via a United Nations program for low-income countries.

Medical workers from across the region were scrambling to help as hospitals in Les Cayes started running out of space to perform surgeries.

"Many of the patients have open wounds and they have been exposed to not-so-clean elements," added Pierre, who visited two hospitals in Les Cayes — one with some 200 patients, the other with around 90. "We anticipate a lot of infections."

Pierre's medical team was taking some patients to St. Boniface to undergo surgery, but with just two ambulances, they could transport only four at a time.

Small planes from a private firm and the Florida-based missionary service Agape Flights landed at the Port-Au-Prince airport Sunday carrying about a half dozen injured from the Les Cayes area. Young men with bandages and a woman were hoisted on stretchers to waiting Haitian Red Cross ambulances.

Silvestre Plaza Rico, who was supervising one of the volunteer flights, said rescue planes had made several airlifts of about a half dozen injured victims each on Saturday. "There were many, many, many, from different towns," Plaza Rico said.

USAID Administrator Samantha Power, who is overseeing the U.S effort to help Haiti, said Sunday that USAID was sending a search and rescue team from Virginia at the request of Haiti's government. The 65-person team will bring specialized tools and medical supplies, she said on Twitter.

Working with USAID, the U.S. Coast Guard said a helicopter was transporting medical personnel from the Haitian capital to the quake zone and evacuating injured back to Port-au-Prince. Lt. Commander Jason Nieman, a spokesman, said other aircraft and ships were being sent.

Several members of Cuba's 253-member health care mission to Haiti were on the scene. The nation's state media showed photos of them giving first aid to victims injured by the quake.