LONDON, Sept. 9 (Xinhua) -- The bill to prevent British Prime Minister Boris Johnson from taking Britain out of the European Union without a deal with Brussels was given Royal Assent on Monday by Queen Elizabeth II. 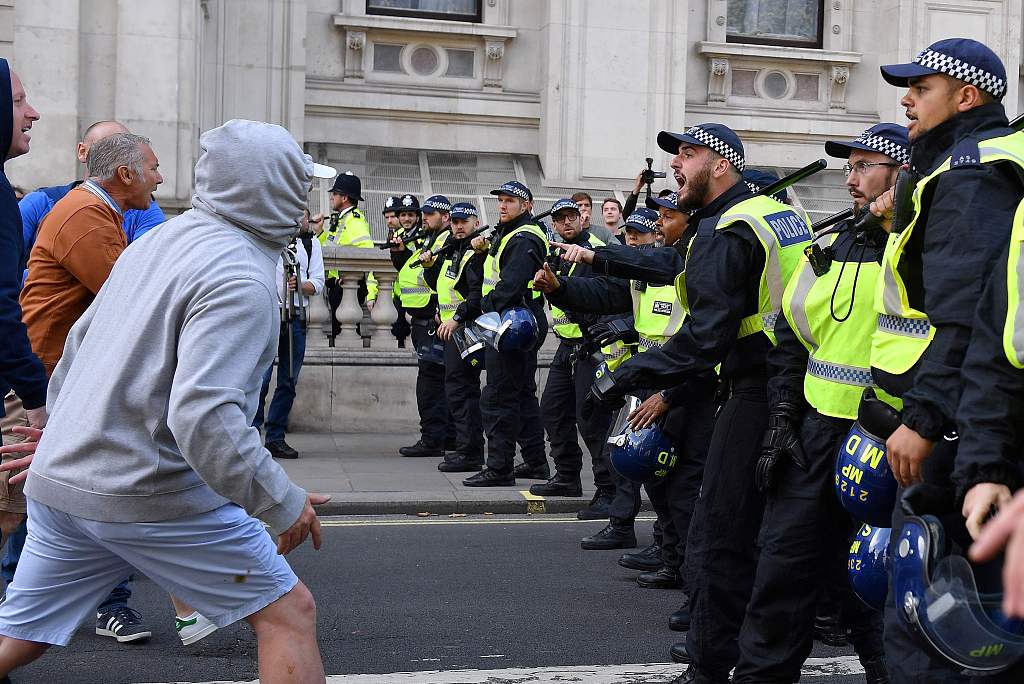 Demonstrators remonstrate with police officers on Whitehall, during an anti-government protest calling for the Prime Minister's resignation, near Downing Street in central London on September 7, 2019. (Photo: VCG)

The signing of the so-called no-deal bill by the British monarch came after politicians in both the House of Commons and House of Lords rushed the legislative process through Parliament ahead of its planned suspension.

It means Johnson now has to go to the European Council meeting of leaders on Oct. 17 to seek an extension to Britain's membership of the bloc until January unless a deal is in place.

Brief announcements were made in both houses of Parliament to inform politicians that the bill had now become law and entered the statute books.

The bill is aimed at tying Johnson's hands after he entered 10 Downing Street saying he would take Britain out of the European Union on Oct. 31 with or without a deal.

Earlier Monday Downing Street confirmed that parliament would be suspended on Monday night, and would reopen on Oct. 14 with a ceremonial Queen's Speech.

MPs are scheduled Monday night to vote on a call by Johnson to seek a general election. Opposition politicians have joined forces to oppose the move, guaranteeing almost certain defeat for Johnson in the vote later on Monday.

The Guardian in London reported that at a Monday briefing with journalists, Downing Street insisted Johnson will refuse to request a Brexit extension till January, even though legislation passed last week, and the Royal Assent later today, would require him to do this.

Johnson's spokesperson said: "The prime minister is not going to seek an extension. If MPs want to resolve this there is an easy way - vote for an election today and let the public decide."

Johnson's threat to refuse to ask leaders of the 27 EU members for an extension has provoked intense debate among lawyers and political commentators about whether he would be breaking the law.