WORLD Questions mount about how Florida building could have crumbled

Questions mount about how Florida building could have crumbled

Questions mounted Monday about how a residential building in the Miami area could have collapsed so quickly and violently last week, as the death toll rose to 11 with 150 still unaccounted for, and desperate families feared the worst. 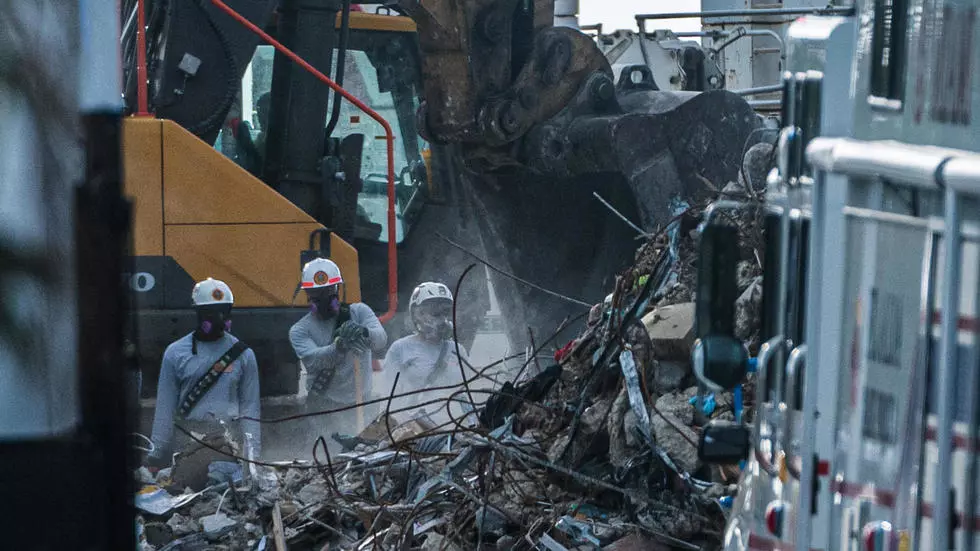 Experts are looking at possible pre-existing critical flaws in the structure of the apartment tower in Surfside, near Miami Beach, which pancaked into a pile of smoking rubble in the early hours of Thursday.

Rescue teams from Florida and abroad continued to scour the debris for signs of life, in torrid heat and high humidity, but as the hours dragged on, the outlook grew increasingly grim.

"The search continues, and it will not stop until there is a resolution," Florida Governor Ron DeSantis told reporters Monday.

Miami-Dade County Mayor Daniella Levine Cava said an 11th body had been retrieved from the rubble, and put the number of unaccounted for at 150.

"As I've continued to stress in all of these briefings, these numbers are very fluid and they will change," Levine Cava told reporters Monday evening.

Miami-Dade Fire Rescue Chief Andy Alvarez told ABC that "voids within the building" had been discovered where survivors could potentially be found, though none had been in recent hours.

"We are holding up for that hope, that faith, that we are going to be able to rescue somebody," he said Monday on the network's "Good Morning America" program.

Officials said investigators were at the scene to do a preliminary review to determine if a full investigation of the incident would proceed -- an outcome which Congresswoman Debbie Wasserman-Schultz said seemed likely.

An October 2018 report released by city officials late Friday revealed fears of "major structural damage" in the Champlain Towers South complex, from the concrete slab under the pool deck to the columns and beams in the parking garage.

"Though some of this damage is minor, most of the concrete deterioration needs to be repaired in a timely fashion," the consultant, Frank Morabito, wrote.

Repairs had been set to begin soon in the 40-year-old building -- but did not come soon enough.

A commercial pool contractor who visited the building just 36 hours before the collapse told the Miami Herald of damage he saw in the basement-level garage, including cracking concrete and severely corroded rebar under the pool.

"There was standing water all over the parking garage," said the contractor who also provided photos and asked not to be named.

Experts who have reviewed video footage of the collapse are now looking at the idea of "progressive collapse" -- when an initial failure, perhaps in the parking garage or even below, would have snowballed into tragedy.

"It does appear to start either at or very near the bottom of the structure," Donald Dusenberry, a consulting engineer who has investigated many structural collapses, told The New York Times.

"It's not like there's a failure high and it pancaked down."

DeSantis said debris with "forensic value" was being taken to a large warehouse to be inspected as investigators seek to determine what happened.

Israeli and Mexican engineers and search-and-rescue specialists have joined an army of American workers at the site, backed by two huge cranes and sniffer dogs.

Surfside Mayor Charles Burkett said accommodation was being found for anyone wishing to evacuate the tower's nearly identical "sister" building a block away, though no structural problems have yet been identified there.

"We're not pushing the panic button right now. But there is a serious question there," Burkett told CNN on Monday.

The 12-story oceanfront Champlain Towers South collapsed as residents slept. Surveillance video showed it coming down in a matter of seconds.

Many members of the local Jewish community were among those affected by the tragedy -- about half of Surfside's population is Jewish, including many members of the Hasidic Chabad-Lubavitch movement, according to Israeli media.

More than two dozen Latin American nationals are among the missing. Canada has also said at least four of its citizens may be "affected," without elaborating.

President Joe Biden said Sunday his administration would coordinate with local officials and was "ready to provide any support or assistance that is needed."

"This is an unimaginably difficult time for the families enduring this tragedy," he said in a statement.