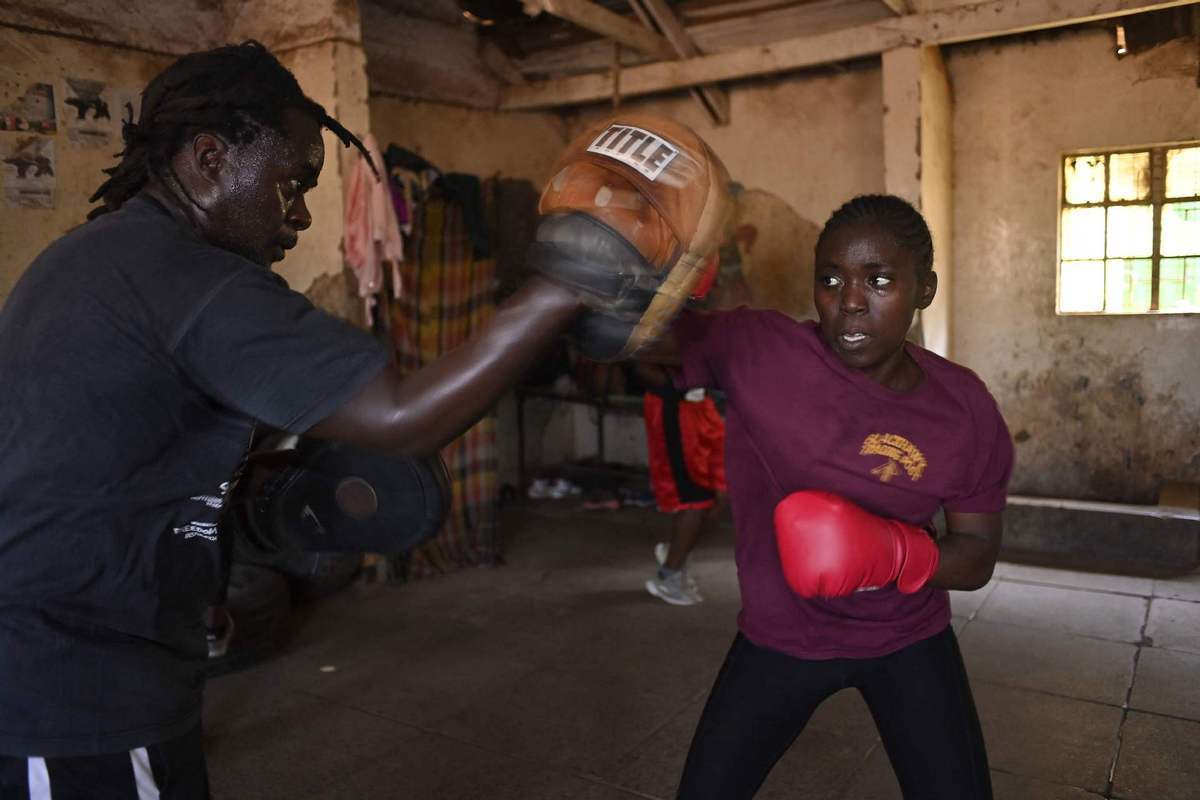 Alfred Analo Anjere trains Emily Juma at the BoxGirls Kenya club during a session in Nairobi on July 1. (Photo: AFP)

NAIROBI, Kenya－The sharp slaps from pounding leather gloves attracted the attention of a few passersby who peeked through the barred windows of a community center in a sprawling, impoverished Nairobi suburb.

Inside the rundown building in Kariobangi North, women and girls trained under the watchful eye of boxing coach Alfred Analo Anjere, founder of BoxGirls Kenya.

More than 3,000 girls and women have taken up the sport at the center in the past 14 years. A faded picture of the cartoon character Asterix wielding boxing gloves adorns the decrepit walls.

All of them started out for the same reason－they wanted to defend themselves in their gritty neighborhoods where poverty prevails and a harsh reality of the survival of the fittest remains.

"One day, when I was out jogging, a man came out of nowhere and slapped me. So I wanted to go back to the gym, get the skills and get revenge," said Sarah Achieng, a 34-year-old professional boxer.

Many of them practice the contact sport for leisure, but some have made it their life, becoming professional pugilists.

Some have even made it to the Olympics like Elizabeth Andiego, who took part in the 2012 London Games, and Christine Ongare, who will compete in Tokyo.

Anjere, who is nicknamed Priest, said he does not want boxing to be about revenge. "Boxing is intended to be a tool … the means to empower girls, for them to have a voice," he said.

A native of Kariobangi himself, Anjere knows full well the problems encountered by women living in Nairobi's impoverished areas, including physical and mental abuse. Often, girls are forced to drop out of school because of poverty, pregnancy or early marriage.

Women are equally vulnerable because they are often not economically independent.

After witnessing Kenya's bloody postelection violence that erupted in 2007, women and girls were often the target of attacks. So, he decided to take action and founded BoxGirls Kenya.

Anjere advocates a holistic approach to boxing, saying women can take from the sport the skills they need in daily life－developing confidence, self-esteem, resilience, and learning the importance of setting goals and striving to achieve them.

"Growing up in these neighborhoods with no self-defense is a bit challenging," said Emily Juma, a 22-year-old up-and-coming talent.

Achieng agrees with this as well, but said what they learn at BoxGirls is more than just self-defense. She said boxing also promotes leadership, self-discipline, as well as self-knowledge and learning to stand by your decisions.

Anjere said the primary objective of BoxGirls Kenya is not to train champions, but women ready to face the outside world.

"Most important is it is their choice," he said. "That's what they wanted to do in life and now they've met their goal."